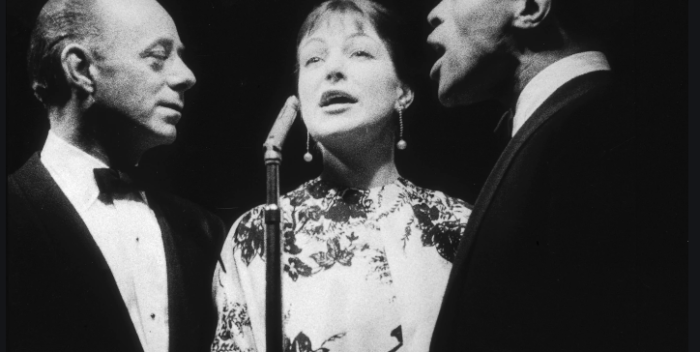 There have been a lot of tributes to Annie Ross in the last day or so. She died yesterday at age 89.

I got to know her a little bit because she came to Elaine’s with the great movie director Robert Altman and his wife Kathryn. They loved her. Bob was a huge jazz fan. He featured Annie in two of his biggest hits, back to back in “Short Cuts” and “The Player.” There was no higher tribute for him, or show of affection.

Annie Ross has a rich, deep catalog of her own records and solo performances. But she is part of two landmark albums from her time as part of the remarkable trio Lambert, Hendricks, Ross. Wikipedia has it wrong. The first album, 1957’s “Sing a Song of Basie”– as in Count Basie– won awards and was the first, but not the best.

Maybe the best vocal jazz album is something an older friend hands you in college. That’s the self titled “Lambert, Hendricks, and Ross” from 1960, with Annie singing “Twisted” and the group harmonizing on “Centerpiece” and “Charleston Alley.”

As it happened, in 1974 Joni Mitchell covered “Twisted,” and then in 1975, “Centerpiece” on her albums. So the realization for me, at 17, that they were covers, and who sang them originally, was a watershed. The “LHR” album became a touchstone for me. I still have the original LP. Later, you could get the “expanded CD” with lots of extra tracks. But for 20 years, I lived with just the original 11 tracks.

One night at Elaine’s, our proprietress said to me, “You know who that is, right? With Altman? It’s Annie Ross.” Elaine loved jazz and jazz musicians. “Go talk to her.” I asked Bob to introduce me. It was really weird to think she was a real person. (Later I met Jon Hendricks, too. This was a little like when I first met John McLaughlin. And Dave Brubeck. You can’t believe they’re real.)

I did talk to her, and a few times more, and I have no idea what I said because I was trying to be cool. But she was the coolest, and so were all these other people, and I’m so sorry they’re still not around because they can’t be replaced.