Nick Cannon– someone showed him the bottom line today. His anti-Semitic remarks, his demand for an apology and the rights to his “Wild n Out” show after Viacom fired him, finally it was drilled into this head that his career was teetering on the precipice of having such a nice Hollywood life.

Cannon posted a triple tweet not quite apologizing for his behavior, but kinda sorta saying he was trying to understand the really stupid things he’s said and done.

“First and foremost I extend my deepest and most sincere apologies to my Jewish sisters and brothers for the hurtful and divisive words that came out of my mouth during my interview with Richard Griffin...I want to express my gratitude to the Rabbis, community leaders and institutions who reached out to me to help enlighten me, instead of chastising me…I want to assure my Jewish friends, new and old, that this is only the beginning of my education—I am committed to deeper connections, more profound learning and strengthening the bond between our two cultures today and every day going forward.”

Nick has done this to save his hosting of Fox’s “The Masked Singer,” and his afternoon talk show coming from LionsGate. He’s deleted all the pro-Farrakhan videos from his YouTube channel, so that’s good. But I don’t know if that’s going to be enough to undo this mess. I’m certainly not interested in watching him host that talk show. I can’t believe anyone wants to see it now. 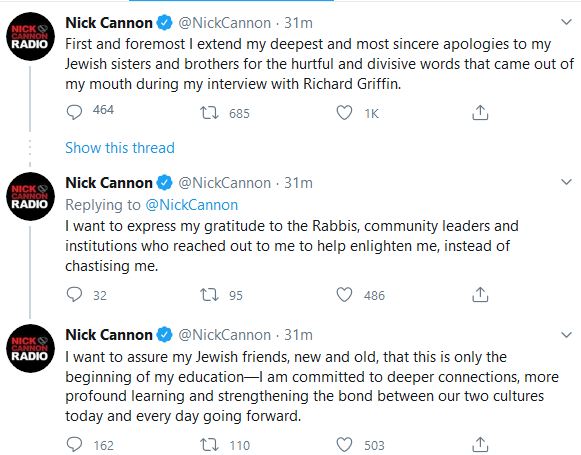