This morning, the president of the United States agreed on Twitter with has been game show host Chuck Woolery over Dr. Fauci, the CDC, scientists and professionals. Woolery hosted low rent game show “The Love Connection” sometime in the distant past.

Woolery wrote: “The most outrageous lies are the ones about Covid 19. Everyone is lying. The CDC, Media, Democrats, our Doctors, not all but most ,that we are told to trust. I think it’s all about the election and keeping the economy from coming back, which is about the election. I’m sick of it.’

He added: “There is so much evidence, yes scientific evidence, that schools should open this fall. It’s worldwide and it’s overwhelming. BUT NO.”

If Woolery is on the Game Show Network — I don’t know if he is — he should be removed at once. If Trump is President– same thing. 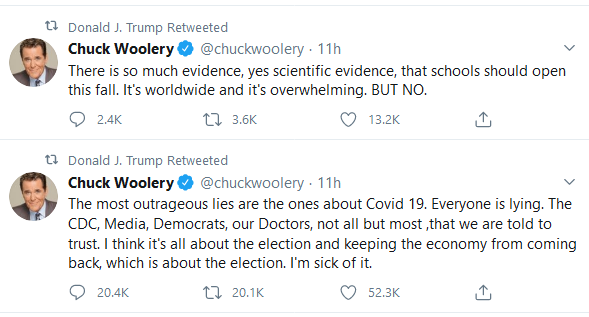