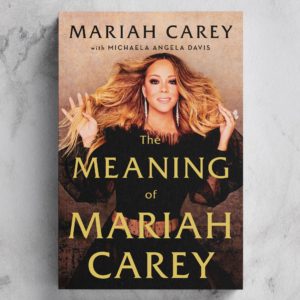 UPDATE NOW: Mariah Carey’s book is titled “The Meaning of Mariah Carey.” For reals. It’s going to be published September 29th. Michaela Angela Davis is the writer. I’m impressed she got her name on the cover. She’s a fashion expert and among her credits is styling Anita Hill for her 1991 hearings. Ms. Davis is not related to Angela Davis, the activist.

This book will either be really insightful or more material for “Celebrity Autobiography,” the hilarious stage show.

EARLIER Mariah Carey has turned in the manuscript of her memoir, she has announced on Twitter. It is called neither “Lamb Chops” or “Butterfly Strokes.” It’s as yet untitled, although I’d put money on “Vision of Love.”

Mariah gets heavy with this book, recalling painful moments from her childhood on Long Island. How much she can get into her marriage to Tommy Mottola is known to only their lawyers. It’s also unclear who Mariah’s ghostwriter was, and how much they sampled from existing material. Her publisher is, well it’s not Bennett Cerf or Alfred Knopf, it’s Andy Cohen from “Watch What Happens Live.” At least we know the promotional part of it will be worth the wait!

Last October, Mariah said the book would be out “sometime in 2020.” That seems impossible now (and it did then) but maybe next spring or summer.

📖 Delivered! "I have learned that beauty has to flourish in the light" 🦋