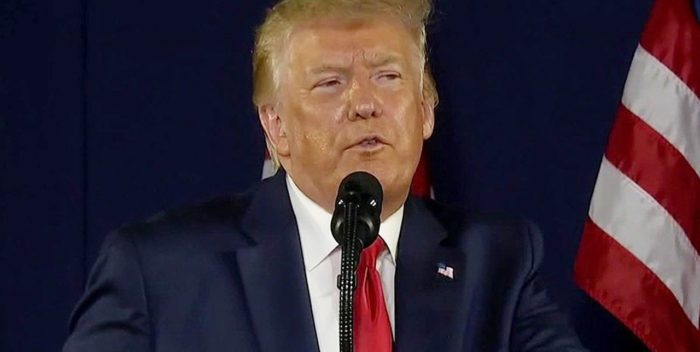 Last Friday night at 10pm, when Laura Ingraham would be doing her batshit crazy TV show on Fox News, Donald had a rally at Mt. Rushmore. It was divisive, racist, and delivered in a weirdly lethargic monotone. Also, his skin was glowing from too much orange paint, hot lights, and humidity.

Only Fox News gave us the whole thing. But it was way too late for the average Fox News viewer, who is 90 and senile. The result was 3 million fewer viewers than Trump’s Tulsa tally show on Fox just a short time ago.

On Friday, 4.3 million of those people watching Fox were over 50. Just 490,000 were in the key demo 18 – 49. At 11pm, the number declined as Trump kept waxing on about something irrelevant or mean spirited.

The Trump Mt. Rushmore special was indeed the most watched show on cable Friday night. But it’s unclear how many of those Fox News viewers were actually awake the whole time or even part of it. It was the most watched show on all TV, as broadcast networks aired reruns of reruns. But a respectable 3.7 million people watched two reruns on CBS of “The Dick van Dyke Show” in honor of Carl Reiner. That was the number 1 broadcast show.

Numbers courtesy of Mitch Metcalf at ShowBuzzDaily, who we don’t thank enough.