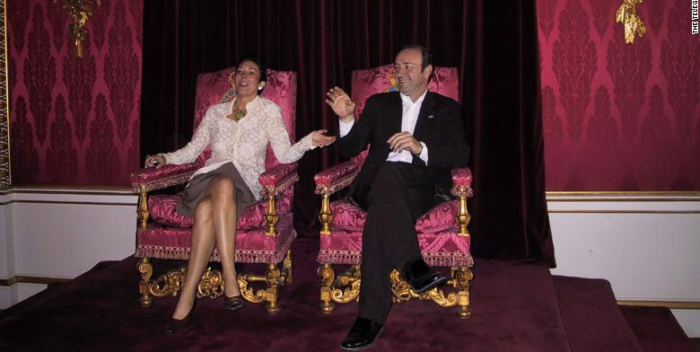 Spacey and Maxwell were there with a group that included former President Bill Clinton, who wisely must have declined the chance to do such a disrespectful thing.

Spacey, accused of a number of sexual harassment incidents, is now a pariah in the world, especially Hollywood. Maxwell could be facing life in prison.

But who let them sit in the thrones, as seen in this much distributed photo?

Sources tell me exclusively that it was Maxwell’s buddy, Prince Andrew, who was with them and encouraged them to do it.

On a tour of the Queen’s private residence, Spacey asked Andrew’s permission, and got it. The Prince, says a source, replied: “I don’t believe the Queen is here. I don’t see why not.”

Once Spacey was seated in the Queen’s chair, he summoned Maxwell. “Come be my Queen!” he told Ghislaine, who joined right in.

Andrew was long associated with Maxwell and now dead sex fiend Epstein, as has been well recorded. Now that Maxwell has been arrested and will soon be in New York to stand trial– and/or sing like a bird– the US Attorney for Southern District of New York wants to speak to Prince Andrew. He’s denied everything so far, but unless he can get Maxwell to keep quiet, he could be in a lot of trouble.

Spacey wasn’t doing much in 2002, other than a cameo in “Austin Powers in Goldmember.” It’s unclear why he was in London, although did visit there frequently. In 2004, he started running the Old Vic Theater. In April of that year Spacey said he was “brutally mugged” while walking his dog in a London park at 4:30 in the morning. The muggers obviously didn’t realize he was the Queen!