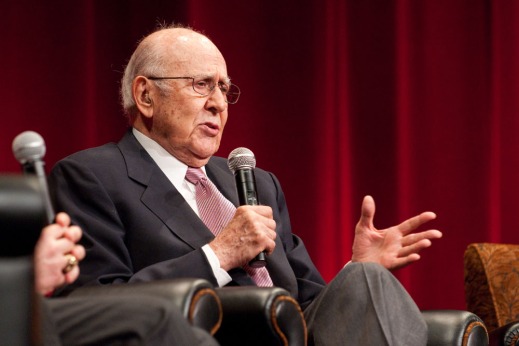 UPDATE 2:27PM Dick Van Dyke writes on Twitter: “My idol, Carl Reiner, wrote about the human comedy. He had a deeper understanding of the human condition, than I think even he was aware of. Kind, gentle, compassionate, empathetic and wise. His scripts were never just funny, they always had something to say about us.”

EARLIER Three days ago, Carl Reiner– who’d become a prolific Tweeter– wrote a mystifying message that sounded like he’d come to the end. He wrote: “Nothing pleases me more than knowing that I have lived the best life possible by having met & marrying the gifted Estelle (Stella) Lebost—who partnered with me in bringing Rob, Annie & Lucas Reiner into to this needy & evolving world.”

It wasn’t his last message, there were a couple more about Noel Coward and about his loathing of Donald Trump. But that family Tweet was a sign. He knew he was done. The remarkable Carl Reiner had died at age 98. Condolences to his family, to son Rob Reiner, to his daughter, and grandchildren, and to Mel Brooks, his life long best friend.

Of course, Carl created “The Dick van Dyke Show” and even played talk show host Alan Brady in it. Before that he was a writer of Sid Caesar’s “Your Show of Shows.” After “Dick van Dyke,” he went on to direct movies and write books and have a late in life acting resurgence in the “Oceans 11” movies.

The movies: Okay, “Where’s Poppa?” is a lost classic, starring George Segal and Ruth Gordon, and if you haven’t seen George Segal getting mugged over and over by the same mugger in Central Park, you must. “All of Me” with Steve Martin and Lily Tomlin transcends genius. There are three other Steve Martin collaborations: “Dead Men Don’t Wear Plaid,” “The Man with Two Brains,” and the real classic, “The Jerk.” Let’s not forget how Carl resurrected George Burns for “Oh, God!” with John Denver. I watched it recently on cable and it’s marvelous, sweet, and so funny.

With Mel Brooks, there are many collaborations but the best and longest lasting is “The 2000 Year Old Man,” which they resurrected many times after its great success. It’s a sketch that lives on to today. And so does Carl Reiner.

What I am most proud of are, creating The Dick Van Dyke Show and informing Mel Brooks that he's 2000 Years Old and knows everything. This, and a lot more, in my Dispatches From Quarantine: https://t.co/tPhSMRBiiM
cc: @SlvrScnStudios


Anyone who followed Carl on Twitter knew how much he hated Donald Trump. He was planning to vote for him and would have been urging everyone to do the same from now through Election Day. We have to do it for him now.

And that Twitter account: if he was doing the posting, he was sending messages. “Does anyone know Olivia deHavilland’s birthdate?” (She’s over 100.) The last week was full of memories, tributes. Looking at it now in retrospect, it’s so classy.

What a life, what a legend.