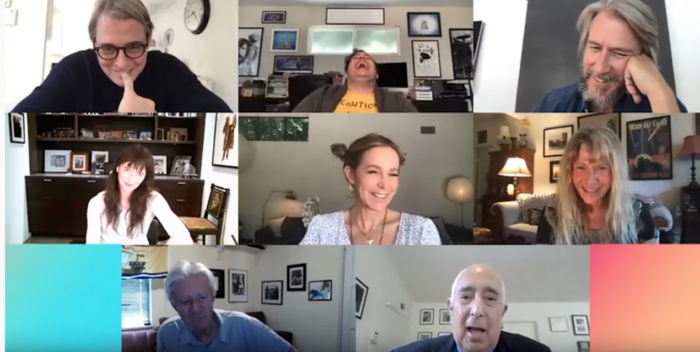 Josh Gad has so much enthusiasm for his “Ferris Bueller” Zoom reunion that it’s infectious. He even brings in Jake Gyllenhaal as a child fan of the 1986 John Hughes movie starring Matthew Broderick, Alan Rucker, Jennifer Grey, Mia Sara, Ben Stein, Cindy Pickett, and Lyman Ward. (Jake was 6 when the movie came out.)

Watch it– there are a lot of laughs. But a couple of Cliff Notes, please. For one thing, no mentions that Cindy Pickett and Lyman Ward met and married and have children from that shoot. They divorced in 1992. Cindy had been a huge soap star on “Guiding Light,” then went on to successes on “St. Elsewhere” and a show everyone liked called “Call to Glory.” Ward is one of those great journeyman actors you’ve seen everywhere, on everything.

Ben Stein turned out to be insane in real life. He’s a right wing conservative who preaches against Darwinism. He is completely crazy. Josh could have done a whole show on him. He starred in a completely nusto documentary in 2006 called “Expelled.” He stills voice overs for commercials. But don’t ask him about anything besides acting.

Kenny Ortega comes on and discusses how he shot the cast, with Broderick in the lead, performing the Beatles’ version of “Twist and Shout.” What isn’t discussed is that the video, which was a hit on MTV, propelled the Beatles’ single back up the charts and to top 40 radio — in 1986.

Not included here is actor Jeffrey Jones. In 1992, six years after searching for Ferris and then playing Winona Ryder’s dad in “Beetlejuice,” Jones in real life became a registered sex offender for child pornography. He did have a career resurrection in the mid 2000s on HBO’s “Deadwood,” but he’s probably not doing interviews.

Josh’s YouTube videos are all fundraisers for charity. For this episode, they’re fundraising for CORE. CORE provides financial relief when a food and beverage employee with children faces a health crisis, death or natural disaster. As the world faces the biggest pandemic in our lifetime, they continue to honor their mission by providing support to families affected by COVID-19.