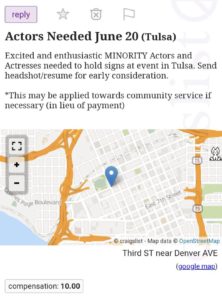 EXCLUSIVE Donald Trump’s carnival in Tulsa was a bust.

The stadium it was held in has a capacity of 19,200. Jay Marciano, head of AEG Live, the company that runs the arena, says it was two thirds empty. Marciano knows exactly how many people went through the doors Saturday night.

He Tweeted “Lying Don’s show in Tulsa is a big fat STIFF! There are only 6624 people in the arena. So much for “There were requests for 1 million.” Total lies. Are we surprised?”

For the week to ten days leading up to Trump’s rally, ads were found on Craigslist and other places asking for paid actors to fill the arena. When the show finally started, the TV Cameras turned their focus on the seas of empty blue seats in every direction. Fox News and Trump’s lackeys endeavored to show a rally that looked “full” but it was a joke. When Marciano chimed in, we knew the jig was up.