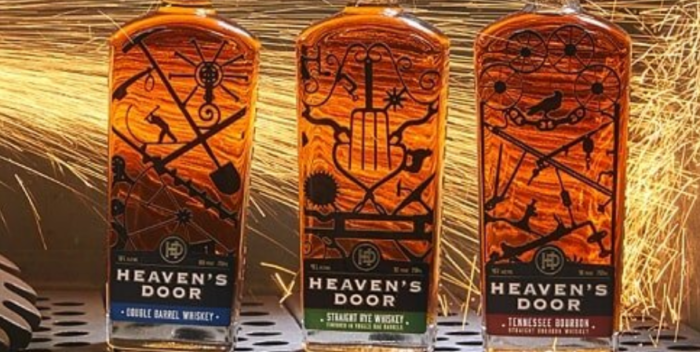 Bob Dylan is not shy about branding. Call this Everybody Must Get Stoned.

Dylan, our poet laureate, has announced on Instagram a “trio of Tennessee Whiskeys” They’re called Heaven’s Door, named for his famous song “Knockin On Heaven’s Door.” Each bottle is 50 bucks. One comes in a faux leather case with Dylan lyrics scrawled on it to make it look like a book. He’s also got an album coming out next week called “Rough and Ready.” It’s unclear which project is the tie in and which the main event. I guess we’re lucky there’s no cologne called “Blowin’ in the Wind” or Shelter from the Storm home furnishings.

Well, why not? Guillermo del Toro has a line of tequila. Francis Ford Coppola has his wine. Ernest Hemingway– who will never go away– is touting cologne. And of course, Kanye West has his sneakers. Why shouldn’t Bob Dylan have some good merch?

Introducing the new exclusive trilogy collection by Heaven’s Door. Featuring all three award-winning whiskeys, the gift pack invites you to experience the breadth of the portfolio. Each 200mL bottle showcases Bob Dylan’s distinctive gate artwork – a striking blend of art and craft.