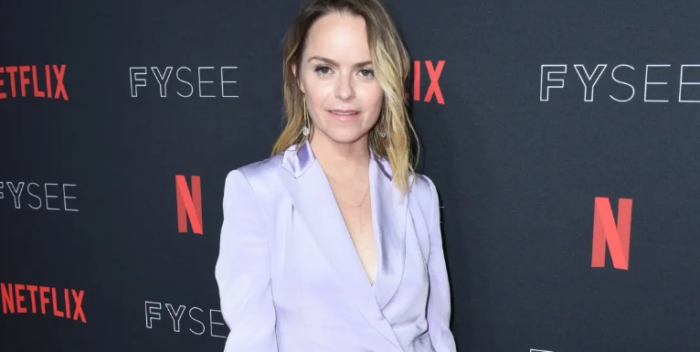 Taryn Manning was featured on “Orange is the New Black.” Today she posted and quickly deleted a message on Instagram that was pro-Trump, pro-conspiracy theory and completely crazy. Who knew? (I suppose people around her did, but not us.)

Four times she uses the hashtag #q, which is code for Qanon, the fringe right wing conspiracy group. She attacks Democratic fundraiser George Soros, the frequent target of right wing conspiracy theorists who believe Soros is conducting a Dark war in secret. (They remind me of the Lyndon LaRouche follower who told me in the fall of 1976 that the world “would come to an end” in four weeks, and he had proof.

Funny thing about “Orange is the New Black.” Laura Prepon went in as a Scientologist, but they say she’s given that up. Turns out Prepon was normal compared to this kook. I hope she’s got a back up plan, because after this, well…Anyway, her next role is playing skeezy Faye Resnick, Nicole Brown’s low life friend, in a B movie about the OJ Simpson murders.

I never pop political but I want to start by saying if I was being attacked the way everyone attacks him I would hold the HOLY BIBLE too. People can feel scared right now. Donald can feel scared too. I do say with all my love in the name of Jesus Christ my savior to be mindful of dragging God into the fake media and trying to pick this choice of his apart. Not about him, it’s about God. This is what I saw, I don’t watch fake news-#q. Who cares? Let it ride. I am happy because Donald chose the power of the sword in his hand #righthand and maybe if we lifted him up rather then tear him apart daily – since he is still in office, wished him the best and that we pray Jesus wrap his wings around the man for heavens sake then he could think straight and make better choices that please all the humans full of hate. Whatever it will take to shush the idle chit chat that is only the devils play time ✝️ No I don’t ‘support trump’ as you will all attack me. I support humans. Let it ride. I see his errors of course but let the Holy Spirit reign supreme now. Donald can be very nice actually. If you’re not attacking him constant. We are in times of utter peril. ✝️ Much bigger beasts at work. I mean for now. #gameover ;) remember in the end. We win. Book of revelations. Stay close to the ✝️ #q ALL I SEE IS THE BIBLE. That’s all that matters to me. #q funded protests – white antagonist – blaming BLM – nice Soros- #gameover #breadceumbs #q know the #truth do the research. It’s all there for you to see. Turn off your TVs. They got you by the ball sacks. I don’t care about Trump I care about kindness and peace #love q Do you know he’s saved more children from human trafficking than Obama ever did. No? Look it up. Stop reading the fake hate news and look at facts. Look at the symbols. Mass arrests. All darkness comes to light. You think this ONE man is the sole problem for the globe? We are 45 in the freedom of the press. Read news from other counties. Read about the Pope. Wake. C’mon. Think bigger for fun.