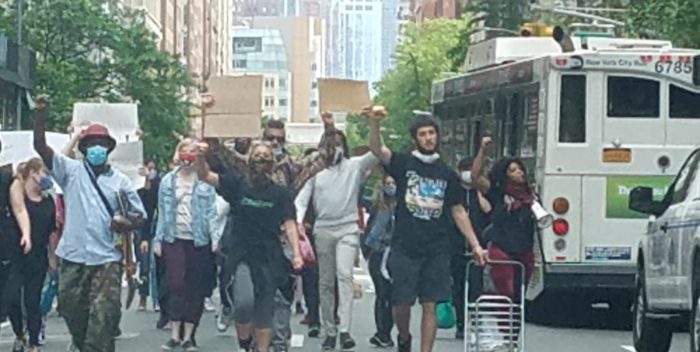 Driving home about 5pm, down Fifth Avenue, I was startled to see this group of protestors marching toward me suddenly as if Tom Hooper had picked them up out of “Les Miserables” camera ready, no songs in their hearts. I managed to get one photo before I had to ditch west on Seventeenth Street because this group of rabble rousing yuppies would have walked right over me if they had the chance.

My first afternoon back in the city since this all began was initially quiet. The Upper East Side is fairly languid. Upper Park Avenue is blissfully unaware that last night Macy’s, the Microsoft store, and other favorite locales were looted for no apparent reason, and not by anyone we knew. No one called to ask if they could pick me up a Surface Pro 6 with a black keyboard (hint: by all means, if you go back tonight).

But once I started down Lexington, hitting the 60s, it was a different story. Bloomingdales– which has very ornate Art Deco grates– is all boarded up. And from 59th St. down, the wood planks are filling windows and doorways even if it’s a futile attempt to stave off some invasion later tonight. People have cleared out. It’s a lot like an old Western, when the whole town seeks cover because they know there will a gunfight in the OK Corral. You hear the silence. You can hear the subways underground, which is unusual.

At Lexington and 21st I headed west listening alternately to WINS and Newsradio 88. They were confident they knew where all the marches were currently underway. I turned left on Fifth Avenue to find all the stores boarded up. In 40 years I’ve never seen anything like it. Kudos to Club Monaco, they seem to have custom boards. Everyone else just had planks, and I was looking at them, with no traffic behind me, when  I saw this crowd advancing.

Years ago I wandered out onto Lower Fifth and saw a huge protest going on by the Washington Square arch. I had taken some cold medicine, and wasn’t paying attention. I thought they were NYU students protesting the Gulf War or something like that. I actually thought, good for them, at last that generation is putting up a fight. But as I got closer, I discovered it was a movie shoot. Julie Taymor was shooting a scene for her Beatles movie, “Across the Universe.”

And that’s kind of what this looked like. Another car pulled up behind me, and some pesky bike rider went around me. He shouted, I guess to the other driver, He’s taking pictures. There was a city bus and an ice cream truck, and everyone had stopped. The news radio stations made no mention of a crowd coming up Fifth, which is a scene that makes no sense to a New Yorker since Fifth Avenue has only gone downtown since the late 1950s.

When I got home, I parked, and walked over to the Patchin Place post office, which should have been closed. One of the nice postal ladies was hanging on the open front door. “Our truck is late,” she said, shaking her head. Across the street, two women– maybe a youngish yellow haired mother and her 10 year old, in cloth masks– were drawing white doves on the dark green planks covering the bank. There was almost no one else on the street. Again, the Villagers had scattered in anticipation of not the Halloween parade, but something bad. The postal lady pointed to a couple of young white people dressed in black, carrying signs that read “Black Lives Matter.” “Those are the protestors,” she said, “they’re here.”

A group that looked like they’d been propelled from a summer camp walked up to us– a couple of 40sih white guys, their kids, all in shirts, shorts, and sneakers, carrying what looked like pizza boxes. “Want some cookies?” one of them asked. “Cookies? Do I have to pay for them?” asked my friend. “No, they’re free.” They were from a place called Insomnia Cookies, in the West Village. They were just going around handing out cookies, like placing a daisy in a rifle. We each tried a butter cookie.

“If you come back tomorrow,” I said, “bring chocolate chip.”

No need, I told her, we said thanks and they headed to Washington Square Park.