Donald Trump’s Twitter account has been cleaned either by him or by Twitter. Twitter has added a blue warning under Tweets Trump has made about mail in election ballots. It now says in blue under those Tweets “Get the facts about mail in ballots” with a large blue exclamation point.

Right now there seems to be an issue with Trump’s Tweets– they’re so far not loading from before May 25th, yesterday, at least under “tweets and replies.” Stay tuned… 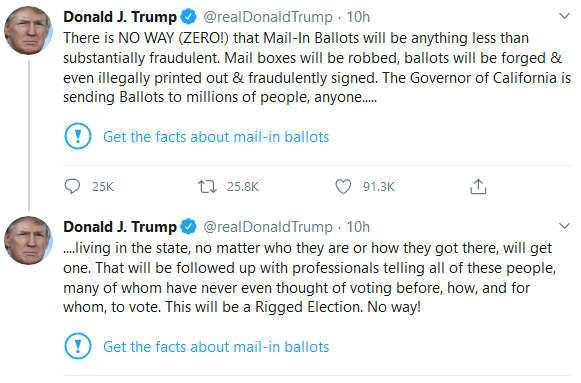 This doesn’t mean that nothing objectionable appears on Trump’s account. There are still his rants about Joe Biden and Barack Obama. Trump is still accusing MSNBC’s Scarborough of a capital crime– unsubstantiated and untrue. This despite a letter sent by the deceased Scarborough staffer’s husband, who wrote Trump a letter begging him to stop it.