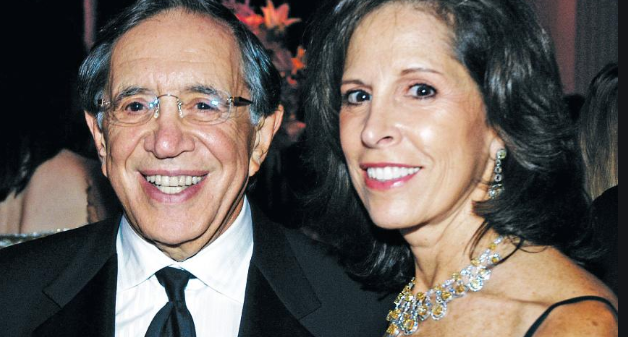 Ron Dozoretz, the wealthy shrink whose wife, Beth, was part of the Bill Clinton March Rich pardon scandal, has died in Virginia at age 85.

In 2001, Beth, former chairwoman of the finance committee of the Democratic National Committee, made headlines when she became entangled in the former president’s pardon of fugitive financier Marc Rich. Ron and Beth were so close to the Clintons that the president was annointed godfather of the Dozoretz’s daughter, Melanie, is 1998.

If you recall, President Bill Clinton, as he left office, pardoned the most famous white collar criminal fugitive, Marc Rich. Rich, a billionaire who did business with every country America deemed unfit, declined to pay his taxes– $10 million– in 1983. He split the US for Switzerland, where he set up shop in his multi national shipping, oil, gas, and aluminum empires. (As it turned, and as I revealed in 2001, he’d never stopped doing business in the US. It was an open secret.)

Beth Dozoretz had suddenly become the bff of Marc Rich’s wife, Denise, who donated $450,000 to the Clinton Presidential Library in exchange for the pardon. Marc Rich feared at the time that George W. Bush would win the presidency from Al Gore and install Paul O’Neill, an enemy, as Secretary of the Treasury–and pursue him legally in Switzerland. As it happened, he was right. Bush stole the election from Gore, and did hire O’Neill, who, coincidentally, died just last week. But Rich secured his pardon, and was able to conduct business freely until he himself died in 2013.

The couple was really wealthy. Two years ago they paid $19 million for a condo in the ritzy Four Seasons Surf Club in Miami. It was their second purchase in the building following a $7.4 million condo purchase the year before.

Back in 2001, when the pardon scandal occurred, gossip columns brimmed with stories that Beth was having an affair with Bill Clinton. She was definitely the conduit to Denise Rich in setting up the library donation that paid off the pardon.

Ron Dozoretz was always there for charismatic Democrats who had affairs. He was Gary Hart’s BFF when Hart’s presidential campaign imploded in 1988. He was such an enthusiastic Clinton fundraiser that in 1996 the president made Dozoretz trustee of the Kennedy Center, where the shrink was “very busy redoing the restaurants and improving the kitchen and the catering service.” Dozoretz managed to scam two 6 year terms by resigning as Clinton left office and then getting re-appointed by Bush.

In 2001, Ron was said to be worth an estimated $250 million. He owned and operated FHC Health Systems, a network of private health care companies that focus on mental health services and substance abuse.