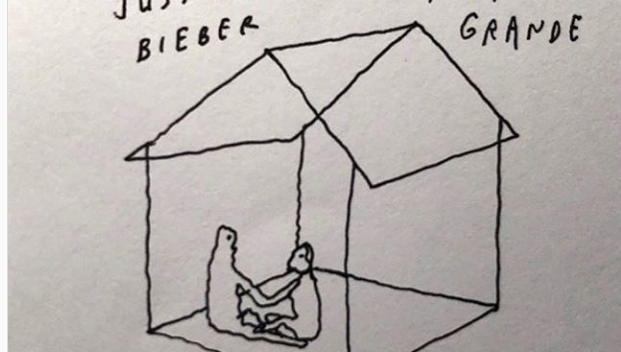 It’s not like it’s a new thing. Songwriting credits have often been handed out to people who had no musical ability at all. Or at the least the ability to write a song. Case in point: Producer Jerry Wexler suggested the title “You Make Me Feel Like a Natural Woman” to Carole King and Gerry Goffin. They graciously offered a credit to Wexler. It’s pretty much the only Goffin-King song with a third collaborator’s name.

That may be the case again for Justin Bieber and Ariana Grande. Their new duet, “Stuck with U” has six songwriters’ names on it including their own. That alone suggested four writers plus Bieber and Grande so they could be paid publishing royalties. (Celine Dion was famous for that in her heyday.)

When “Stuck with U” first appeared on Wikipedia, it was just the half dozen. (You may wonder how six people could write a song. Is it like a factory line?)

Anyway, now the name of Scooter Braun has been added to the credits. That would make seven people who labored to write a very unoriginal piece of pop. (It sounds suspiciously like Rihanna’s “Love on the Run.”) Braun has only one other songwriting credit in the world– on the Bieber song, “Purpose.” On that one, he’s only one of six writers. Braun– whose real name is Scott Samuel Braun– simply doesn’t write songs. Or produce them.

It’s likely that he came up with the title, “Stuck with U,” since the duet is a contrivance for the pandemic. He does manage both artists. And there’s money to be gotten out of it. All the proceeds from “Stuck with U” are allegedly going to charity. But this does give him two songwriting credits. Let’s say three more and the Songwriters Hall of Fame will no doubt induct him.

Since Friday, by the way, “Stuck with You” has had just 20,000 paid downloads– not a lot– and another 69,000 worth of streams for a total of about 92K give or take. No word yet on whether Rihanna’s writers have given it a spin.