Well, this is how a rumor starts.

First, Robert De Niro told Stephen Colbert on his show that he would play Andrew Cuomo in a movie about the pandemic. Go to 1:50 in the clip.

Then Stephen Colbert told New York Governor Andrew Cuomo on his show that Robert De Niro wants to play him in a movie. Cuomo, who’s at least a decade younger than De Niro, was still thrilled.

Then a cab driver with a Twitter account told Mira Sorvino, who follows him, that De Niro would direct a movie about COVID-19, and play Cuomo. The Tweeting driver said Mira Sorvino would play scarf wearing Dr. Deborah Birks. Sorvino liked it, so she emailed De Niro’s producing partner, Jane Rosenthal. 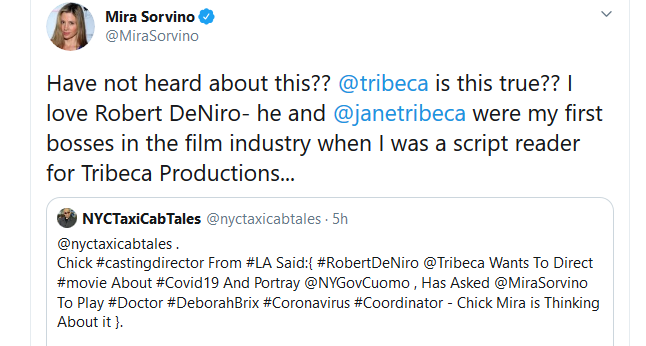 Rosenthal responded to Sorvino that Bob was just joking, but hey, you never know. 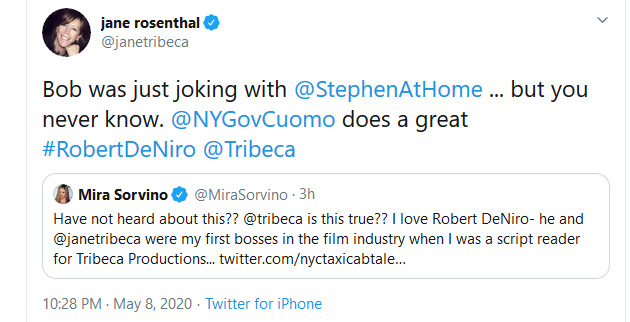 And even though Brad Pitt played Dr. Fauci on “SNL,” I say, exhume Phil Rizzuto, the late Yankee catcher and sportscaster. Fauci is channeling him or something. Get Scorsese to direct and use old footage of Rizzuto CGI’d onto Joe Pesci. Someone call Netflix now!

And that’s how movies are made.