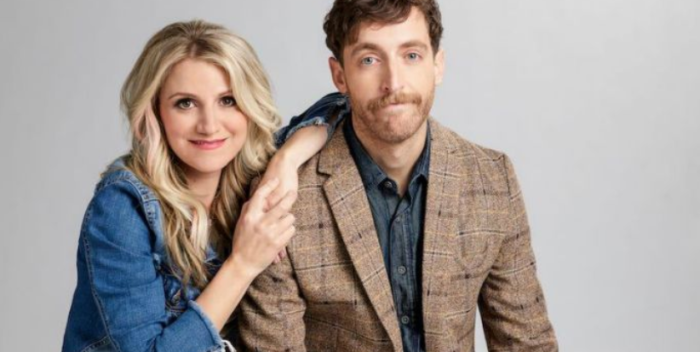 CBS has greenlighted a new sitcom for this fall with an unusual star.

Thomas Middleditch, who comes HBO’s “Silicon Valley” and cell phone commercials, will star with Broadway great Annaleigh Ashford in “B Positive.” The title refers to his blood type as Middleditch’s character is described as a therapist and newly divorced dad who needs a kidney donor, and Ashford is “a rough-around-the-edges woman from his past who volunteers her own.”

They should have called it “You’re Kidneying.” Bah bum!

Anyway, last September Middleditch made headlines with an interview he gave to Playboy, when it was still a magazine.

Middleditch said: “To be honest, swinging has saved our marriage. We have different speeds, and we argue over it constantly, but it’s better than feeling unheard and alone and that you have to scurry in the shadows. By the way, it’s now called being “part of the lifestyle.” The term swinging is old.”

The actor continued: ” I self-deprecatingly call myself a pervert, but that’s not what it is. I just like it. I’m sexual. I’d always thought I was a romantic and that when I fall in love, that stuff fades away. It does for some years—enough to be like, “I should get married, and I’ll be different.” But it’s part of me. If that’s part of your being and it feels important to you, find a way to explore it, because repression sucks.”

It’s too bad there were no upfronts this year for CBS. There probably won’t be TCA interviews this summer, either, but if there are, I’d like to ask Middleditch to expound on this subject. Maybe they can work it into the show once his character gets the new kidney. “Meet cute” takes on all new meaning!