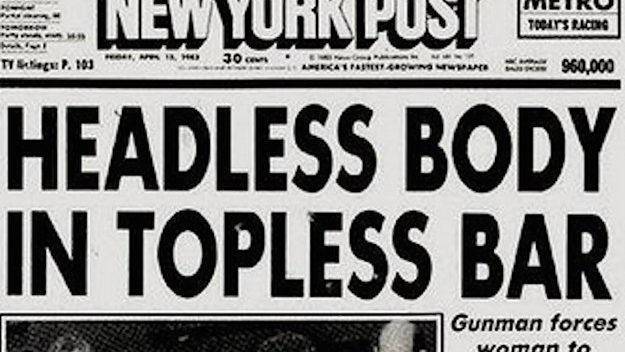 Years ago, in 1993 when the NY Post almost ceased publication for good, the drawing of founder Alexander Hamilton on the front page showed a tear falling from his eye.

And here we are again. Rupert Murdoch’s money losing but headline making tabloid is in a downward spiral that even he won’t tolerate. Or make that, his kids.

Yesterday saw a purge at the Post that they’ve never experienced during Murdoch’s second reign. At least 25 staffers are out, furloughed or outright laid off. The names will be noticeably missing to anyone who still follows the Post– and there are plenty.

Said to be out is long time business writer John Crudele. He’s been there for at least 30 years. Furloughed are editor Steve Cuozzo, the popular editor and restaurant reviewer; Lois Weiss, whose real estate column is a must read; Michael Riedel, the theater columnist whose poison pen drips with dramatic ink. I’m told that about 9 people in the sports department are out, maybe for good. There are possibly 20 total furloughs and 6 completely gone.  Terrific arts editor/writer Barbara Hoffman is also out. Same for Serena French, fashion editor.

The horoscopes remain, as well. But they didn’t predict this.

Don’t start gloating that you “always hated the Post” and so on. For one thing, these people are all talented journalists whose contributions make the Post so regrettably readable every day. For another, the tabloid press is what saves New York from ignorance. If we just had the New York Times for information, no one would know a thing. The tabloids quickly expose scandals for better or worse. We need them more than you think. The reason Los Angeles lumbers along mired in unresolved crimes is that they have no tabloids. You can literally get away with murder there. Not in New York, where the tabloids will run down every lead and make sure all 8 million of us know about it. The Post and the Daily News must remain alive, like it or not.

Let’s hope that when the pandemic is over, and life returns to some normalcy, the Post will bring all of these people back.

PS A salute to the late Vinnie Musetto, who wrote the Post’s most famous headline, “Headless Body in Topless Bar.” We miss you, Vinnie!