I don’t get Taylor Swift. She was paid millions by Big Machine and Scooter Braun for her catalog. She had the chance to buy the catalog, or buy Big Machine. Instead, she took millions more and fled to Universal Music. Then she carped it about endlessly in public. 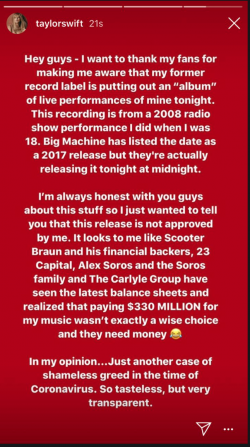 Now tonight Big Machine is releasing a live album from a 2008 radio show. Taylor is mad, she’s posted a notice to Instagram stories. She writes “It looks like Scooter Braun and his financial backers, 23 Capital, Alex Soros, and the Soros family and The Carlyle Group have seen the latest balance sheets and realized that paying $330 million for my music wasn’t exactly a wise choice and they need money.”

Yeah, one second. Taylor may not like it, but she told it to them. And she will be PAID handsomely on the publishing for all the times those songs are played somewhere. I mean, she will rake it in. So please, enough.

And this has nothing to do with coronavirus, as you’ll see writes. If there were a blizzard this week, she’d say How could they do this when it’s snowing?

So far there’s no listing anywhere for this album that Taylor is crying about. It’s not on amazon or Spotify. Let’s see what happens.