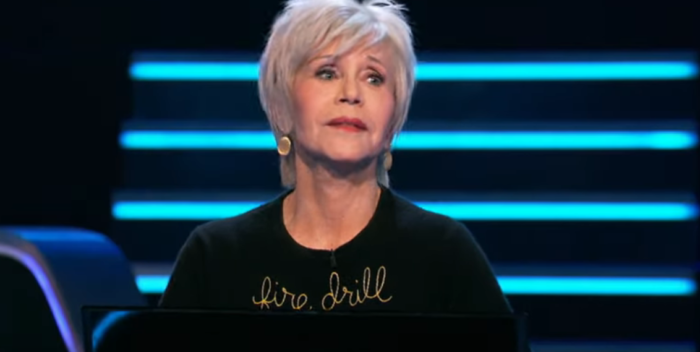 Two time Oscar winner Jane Fonda appeared on “Who Wants to Be a Millionaire” Wednesday night. She won $125,000 which will go to her Fire Drill Fridays activist program at Greenpeace.

Fonda looked fantastic, of course, with a “Klute”-like short hair cut, all shiny gray. She wore a Fire Drill Fridays t shirt. Her “smartest friend” who accompanied her was comedian Louis Virtel, who actually was pretty smart. Jane stopped from answering what would have been the $250,000 question about cities in time zones. Good thing, too, because she would have lost.

One question was about Lonesome George, a famous gigantic tortoise in the Galpagos. Turned out, Jane had met him. Here’s the clip. PS If the Kennedy Center is going to do their honors this year, it’s well past time for Jane to be inducted. She’s the most fearsome and devoted American. Plus, all the awards. And her contribution to American culture is incalculable.