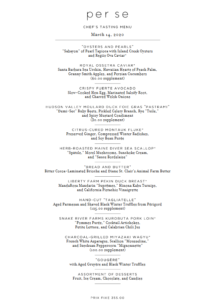 Donald Trump’s daily insane ramble, today from the Rose Garden, included a long list of CEO’s and companies he said he would consulting about re-starting the economy. It reminded me of a satirical list Kurt Vonnegut once included in one of his books, where just name dropped everyone he could think of who was famous.

For Trump, it sounded like he was reading off donors to the Jerry Lewis Telethon. “From Brown’s in the Catskills…$500… love ya…Do ya still make the matzoh ball soup?”

Trump had the list of businesses alphabetized by genre, so eventually he got to “food” and reeled off McDonald’s. Coca Cola, “Pepsi-cola,” Wendy’s, and assorted fast food brands. But then he just blurted out these names: “Wolfgang Puck, Thomas Keller, Jean-George– “my friend, Jean Georges” meaning Jean-Georges Vongerichten, and “Danielle” meaning Daniel Bouloud.

All the Chick-Fil-A eaters must have wondered who those men were? They are world class chefs who despise Trump and wouldn’t welcome him on a regular day if their lives depended on it. But also, Trump’s $1200 stimulus check will not be going to their customers, since people with incomes that can afford their eateries are ineligibe for relief (I hope).

That amount of money would just about cover two people for dinner at Keller’s Per Se, and maybe four at Bouloud’s Daniel restaurant. The Chef’s Menu at Keller’s Per Se, for example, was $355 on March 14th. The Salon menu was $225. That’s for one person.

So I’m not sure how Keller, or any of the others, will be useful on Trump’s commission. And if Trump thinks he’s getting a free meal at any of those places, he can forget it. Someone in the kitchen will spit in his Oysters and Pearls before they make it out the door.