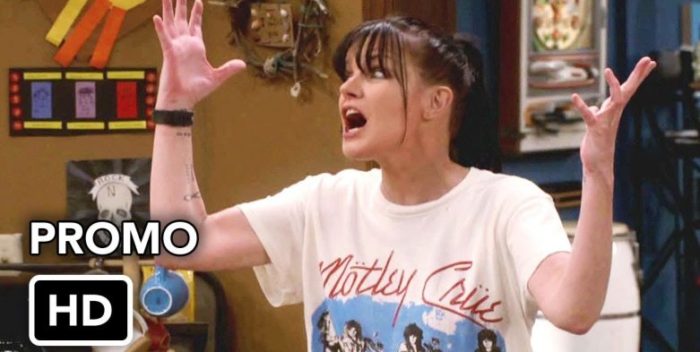 Pauley Perrette is back! The 15 season star of “NCIS” left that show with a lot of issues (hers, about them). She had a nice gift for comedy on the procedural hour, and was determined to get her own sitcom.

Well, the debut of “Broke” last night pulled in 7 million viewers at 9:30pm. Success! Granted, “Broke” benefits from CBS’s hit lineup, but Perrette and co. held on to their lead in from “Young Sheldon” with 9 million, “Man with a Plan,” and “Mom” each with over 7 million. “Broke” already feels like a hit that will play nicely in the CBS lineup for a long to come. Good for Pauley. She deserves the success after putting up with that nonsense at “NCIS.”

Unfortunately, Pauley’s success comes at a price for NBC’s “Indebted,” Fran Drescher’s comeback vehicle. That new sitcom scored just 1.3 mil viewers against “Broke.” Fran Drescher should be in a hit. So NBC had better move it earlier and retool it a bit. But Fran v Pauley is a little too much of the same programming.

Fortunately for “Law and Order SVU,” their fans were indebted to their show. The 24 year old hit brought back 3.5 million fans at 10pm and won the night at NBC. Yes, it’s half the viewers CBS had, but it’s a better than a sharp stick in the eye. “SVU” really deserves an Emmy campaign this season. Week to week it’s high quality on every front.