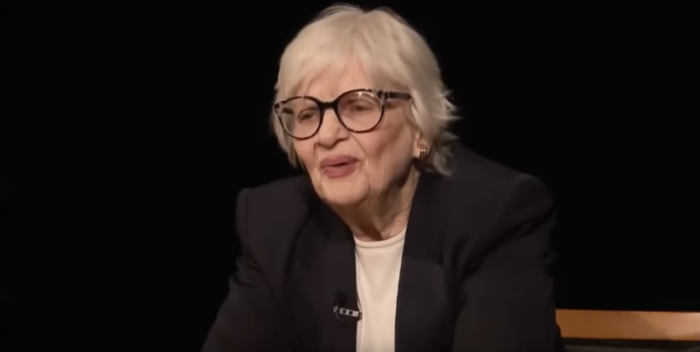 Famed biographer, literary star, and beloved friend of so many (myself included) included in New York. Patricia Bosworth has died at age 86. She was three weeks away from her 87th birthday.

Patti– I knew her for 30 years– was simply a force to be reckoned with, all in the best ways. She wrote bestselling biographies about Diane Arbus, Montgomery Clift, Jane Fonda. She also wrote her own amazing story- -her father was the lawyer for the Hollywood 10 screenwriters during the Blacklist. She was absolutely remarkable, and she will be sorely missed.

She was also an actress in her younger life, a successful one. She studied under Lee Strasberg at the start of the Actors Studio and they were all her pals– Monroe, Brando, Kazan, all of them. She appeared in lots of golden age TV, but her biggest job was in Fred Zinneman’s “The Nun’s Story.” She also appeared on stage with Helen Hayes in “The Glass Menagerie.”

In 1988, I’d already known Patti for a while and I asked her if she’d write a profile of Steve Martin for me in Fame magazine. He was appearing in “Waiting for Godot” directed by Mike Nichols at Lincoln Center. It was one of the best things I’d ever read, but Steve was upset, he was sure he hadn’t said things like “how can actors really do 8 performances a week?” Well, Patti had taped the whole thing, and listening to later he had said all those things. She was an excellent journalist, among her other great traits.

She wrote a lot of wonderful books but she was mesmerized by Jane Fonda, who’d already published her own book. Patti’s take was uniquely hers, and very informed by her own history in Hollywood. Everyone should read it.

They should lower the lights somewhere tonight for Patti Bosworth. They broke the mold when they made her. I was lucky to know her.