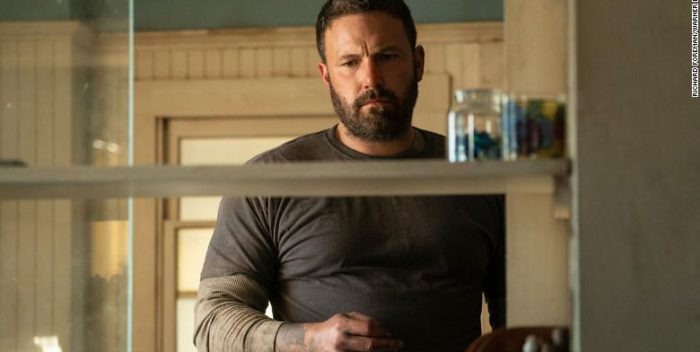 SUNDAY MORNING UPDATE: Somehow, not quite sure how, “The Way Back” made its way to $8.5 million. That’s 1 million more than its multiple. Hmmmm…word of mouth between Friday and Saturday must have had the phone lines buzzing. We’ll see if that stands up when the hard numbers are counted tomorrow.

SAT AM: Ben Affleck’s soul baring publicity tour for “The Way Back” didn’t work, as it turns out.

The well reviewed story of a basketball coach with addiction problems made just $2.6 million last night. A $7 million weekend is hoped for but not certain.

Was it worth it? I know more about Ben Affleck’s personal problems now than I ever did, or wanted to. In the past couple of weeks he’s spilled his guts about being an alcoholic, about divorcing Jennifer Garner, his kids, his parents, and so on. I now know that he has a full color back tattoo. This is all TMI.

This was all in service of selling “The Way Back,” which I haven’t seen but has decent reviews. On Rotten Tomatoes, “The Way Back,” directed by Gavin O’Connor, has an 88 among reviewers, and an 88 for audience interest. That second number should be worrisome. Not many people want to see a bloated Affleck mired in self-pity trying to earn the respect of high school kids. After all, this man used to be Batman.

Affleck’s career is far from over. But it’s going to take a lot to get him back on track. It’s not like “Batman” hurt him. He’s directed some great movies, like “Argo,” “The Town,” and “Gone Baby Gone.” He lost his way with “Live by Night.” Later this year we’ll see him Adrian Lyne’s comeback film, “Deep Water,” which is already getting a PR push. (The PR is trying to push a “thing” with co-star Ana de Armas, of “Knives Out” fame.)

I’d clamp down on the “Woe is me” thing, frankly. It’s not worth it, financially. Or emotionally.