Is it virus panic or lack of interest?

Former Broadway blockbuster “The Book of Mormon” is in distress. Last week the receipts came in just under $900,000. The Eugene O’Neill Theater was only 75% full. This was “Mormon”‘s worst showing since last July 14th.

Lately, producer Scott Rudin has put “Mormon” on many discount sites as the winter has turned out to be harsh and cold. The once great box office champ, always sold out, commanded huge ticket prices. But over a decade in, and with touring companies all over, “Mormon” in New York seems like it’s finally in decline. And fast.

Rudin is also battling uphill with “To Kill a Mockingbird.” Even though he just pulled off a great PR Stunt at Madison Square Garden, Rudin can see that box office is off by almost 50% since November 3, 2019. Last week, “Mockingbird” was down to $1.1 million. That’s the lowest it’s been since at least June, if not ever. Ed Harris leaving soon, with Greg Kinnear coming in to play Atticus Finch. I wonder if anyone’s explained to Kinnear what’s happening.

Also having trouble: “Jagged Little Pill,” based on Alanis Morissette’s record album from 1996. “JLP” also came in around $896,000. The Broadhurst Theater is 68% attended, which is no way for a new musical to perform. “Pill” is hoping the Tonys and other awards will come its rescue, but that’s still in the distance. First, it has to get through March. 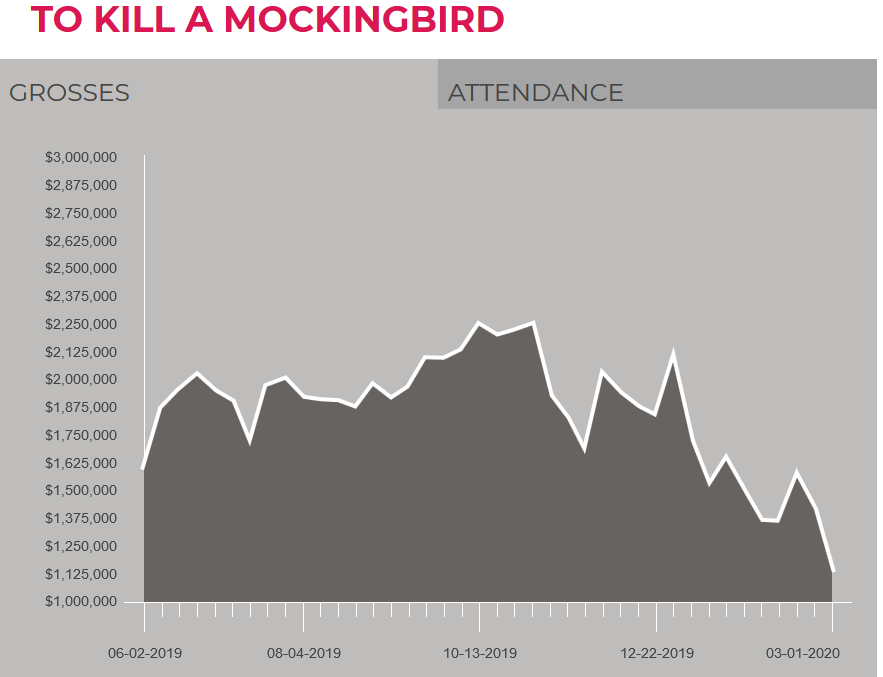 Numbers and chart courtesy of the Broadway League