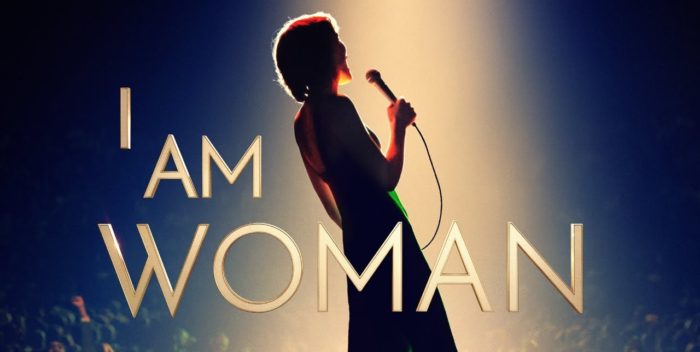 Helen Reddy’s “I Am Woman” came out in 1971. I was 14 and didn’t care about it one minute. But “I Am Woman” fast became the anthem for the women’s movement, and Helen Reddy, like Olivia Newton John, became a hitmaking machine right through the decade. On the surface she was bland, white bread, and perfect.

But in real life, Reddy was a mess. She was married to her manager, Jeff Wald, who quickly became a coke addict and a monster. He also started producing movies. By 1980 he was neck and neck with Donnie Simpson in the debauchery and self abuse department. The only difference is Donnie died. Jeff Wald lived. While Helen kept having hits and selling out Las Vegas showrooms.

Helen Reddy was never cool. But she sort of gets that way in Unjoo Moon’s feature film, “I Am Woman,” that positions Helen as a feminist who woke up and got control of her life after her crazy, brilliant, domineering husband just about destroyed it. Reddy’s story is a lot like that of Debbie Reynolds or Doris Day, stars who trusted husbands who emptied their bank accounts and wrecked their self esteem.

The difference is that Reddy and Wald are still very much alive, and so are their children. So Moon had to win their trust to make this movie. Luckily her husband is Oscar winning cinematographer Dion Beebe (“Memoirs of a Geisha”), which probably kept the already low budget in place. Beebe’s involvement means the movie looks good, far better than it should. The screenplay by Emma Jensen economically tells Helen and Jeff’s story, keeping some of the gore but not all of it. For that you have to read their competing memoirs. The movie is inspired by Helen’s.

Australian actress Tilda Cobham-Hervey, a beauty, does Reddy justice even if she doesn’t sing. (A separate singer was used because, as Moon told me, “Helen’s voice didn’t look right coming out of Tilda’s mouth.”) It works, whatever they did, and Cobham-Hervey is a find on a major scale. Ryan Murphy favorite Evan Peters plays Jeff, even though he looks nothing like him he captures Wald’s insane hubris. Peters’ TV fans will be impressed.

The other player here is Danielle McDonald as 70s rock writer Lillian Roxon, author of the seminal “Rock Encyclopedia.” Lillian died suddenly in 1973 at age 40 from an asthma related illness. (She’d be 87 now. It’s hard to believe.) The book was like the Magna Carta of rock. (Is it still in print? I have the original paperback.) No one who wrote about music subsequently didn’t read this book like it was from the Temple Mount. I didn’t know that Reddy and Roxon were BFF’s because they were each Aussie’s in New York, that white bread Helen went with Lillian to Max’s Kansas City, and so on.

Helen was a Bad Girl underneath all the G rated songs. Maybe that’s what attracted her to Wald. That much you don’t get in this movie. There’s kind of a disconnect between the Helen the Star and Real Helen. I also don’t know why she retired in 2002. There are plenty of active 78 year olds out there rocking and rolling. But Reddy called it a day early, which means she has lower name recognition than some of her peers.

“I Am Woman” is better than a Lifetime movie. It’s certainly timely, as Helen did fight for her rights as Wald was limiting them. Moon’s movie deserves a decent theatrical release, and a promotional push on Hulu, Netflix, wherever.  It’s of a piece with 70s rock biopics “Rocketman” and “Bohemian Rhapsody.” (What’s next, the Anne Murray story?)

Thanks to the Athena Film Festival, currently running at Barnard College (Columbia University), and showing some pretty interesting films this weekend. They gave “I Am Woman” life tonight, months after its premiere at the Toronto Film Festival.

PS If you see the movie, Helen had a daughter before she met Jeff Wald, named Traci, who obviously got used to show biz life. She married Lucas Donat, son of “Waltons” actress Michael Learned and the late great actor Peter Donat, whose uncle, Robert, was also a famous actor.