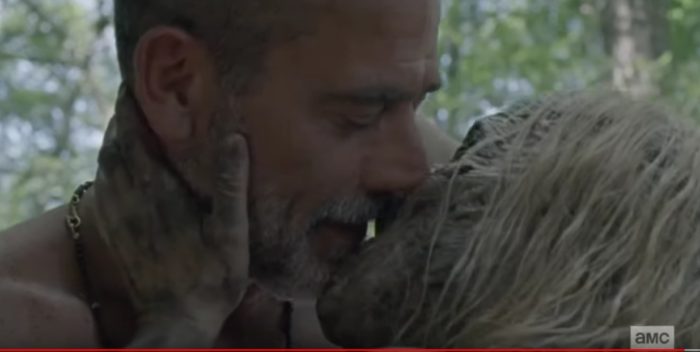 Viewers of “The Walking Dead” — and they are fewer and fewer all the time — have been losing interest in the show. But on Sunday, the word must have gone out that something very upsetting and shocking was going to happen. Negan, who I guess is considered human, had sex with a  crazy women named Alpha who wears the masks of dead people. (She’s a Zombie* wannabe.) They got as naked as you can on AMC. Urrgghhh!

The result of this unpleasant coupling was a 9 percent rise in ratings. The fall finale scored 3.21 million viewers. The new episode brought 3.5 million pairs of eyes. The number rose by double digits in the demos, too: adults 25-54 (2 million, up 15 percent) and adults 18-49 (1.6 million, up 17 percent).

Will this new supercouple (yuck yuck yuck) bring the show back its glory days? I doubt it. But freak shows never get old.