One week and it’s all over for Justin Bieber’s “Changes.” The biggest changes, he may find, is that his audience has been cut by 500,000.

This morning “Changes” is number 7 on iTunes, an ignominious fall after one week (really six days). The new number 1? K Pop group “BTS.”

Even appearing on James Corden’s late night TV show all week hasn’t helped “Changes.” (Maybe he shouldn’t have dressed like a homeless person.) So far this week the sales number stands at around 120K. Bieber’s last album, at the height of his career, was “Purpose” with 666K copies sold in its first week.

What’s happened? Bieber’s audience has finally grown up and moved on, at least in the US. This is very alarming for his concert tour, which begins on May 14th in Seattle and proceeds through America’s heartland through the summer. For every show on Ticketmaster there are huge chunks of seats unsold so far. The blue areas below are all for sale including, as you can see, floor seats and those expensive premium seats that include a Meet and Greet package with the Biebs.

Concert venues are going to hope for last minute purchases, walk up business, and kids suddenly being out of school with nothing else to do. This is always the dilemma when an album comes out and fizzles before a tour begins. Bieber may have to structure his shows as “best of” situations to get his previously teen fans back in the seats. But the next Justin Bieber tour isn’t going to be stadiums, that’s for sure. Watch for Stub Hub to go crazy on this one! 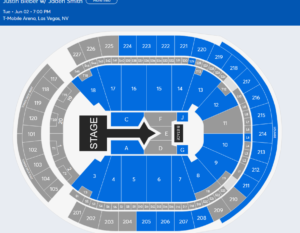 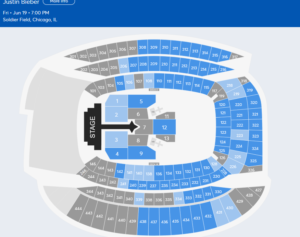