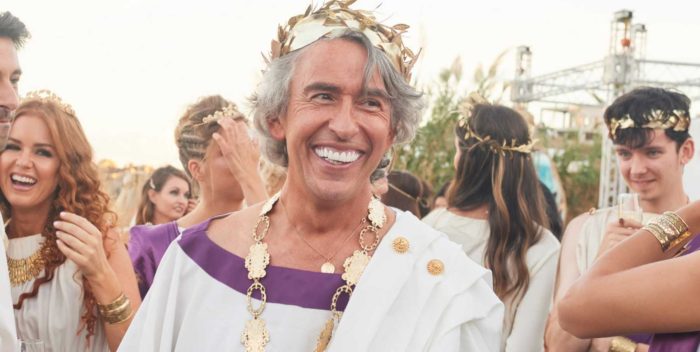 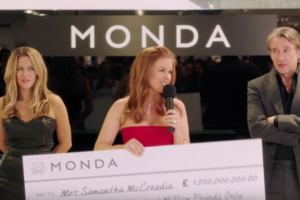 I wouldn’t have realized that Caroline Flack was in Michael Winterbottom’s “Greed” but her name is first in the credits on the end crawl. (That’s her in the photo, on the left.)

Flack, who sadly committed suicide last week in Britain, makes a cameo as an employee of self promoting billionaire played by Steve Coogan.

It’s an odd hook for an even odder movie, a satire of moguls who’ve become wealthy in the garment world of Zara, H&M, and so on. Coogan’s McCreadie reminded me of Philip Green, whose TopShop/Top Man stores were launched with great fervor and then died in the US and UK, losing hundreds of millions of dollars.

“Greed” reads like a Robert Altman movie scripted by Armando Iannucci. The problem is, just when you feel Winterbottom has the whole thing in hand, he kind of blows. He screws the pooch, jumps the shark, whatever. But for 80 minutes or so leading up to his mistake, “Greed” is trenchant.

This is in large part due to Steve Coogan as Sir Richard McCreadle, a kind of horror story of a self made man who builds his empire on a house of cards. Also, everyone who works for him hates him. His youngest son does, too. Fans of “Succession” will enjoy the McCreadle family, which is so dysfunctional you wonder how they got this far.

Isla Fisher is wonderful as  McCreadle’s ex wife, who is still part of the business and is attending his Malcolm Forbes-like blowout 60th birthday part on Mykonos. Sir Richard is actually pricing celebrity performers like Elton John and Shakira, while at the same has reconstructed his own Greek theater and imported a real lion to fake eat warriors.  A really funny touch is the addition of Brit actress Shirley Henderson as McCreadle’s Lady McBeth-like mother. (The joke is that Coogan and Henderson are the same age.)

There are plenty of subplots including a reality show in which Sir Richard’s daughter is participating with her fiancee, who, of course, turns out to be gay. Sir Richard is also being followed around by a hired biographer, who is treated badly and sees all the horrors of his subject. He witnesses the worst as Syrian refugees come to occupy the public beach adjancent to the gala, and Richard orders them removed.

“Greed” had a lot of potential. But things turn sour once Coogan’s character is moved off the story. And then the movie, which is self-explanatory is in its satire of the horrible rich eating their own, is kind of wrecked by a tag at the end which spells out — almost in power point style– facts about the poor, immigrants, sweatshop conditions, etc. Is this a movie or a news doc? The spell of the fiction is broken. It’s wholly unnecessary.