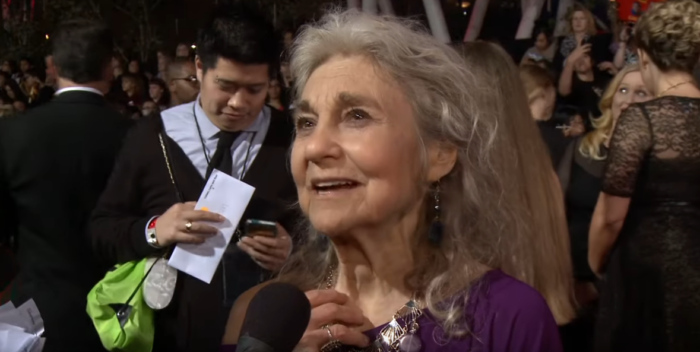 Lynn Cohen died yesterday at age 86 according to friends on social media. She was not famous in the movie star sense and won no awards, but she was beloved and well known in the acting world. You’d know her face if you saw her. She played Magda, Miranda’s nanny on “Sex and the City” for years and was well known from “The Hunger Games: Catching Fire.” I was always excited to see her and talk to her at screenings.

Cohen got her start in movies and TV late in life. In 1993 she appeared as Mrs. House in Woody Allen’s “Manhattan Murder Mystery.” She’s been murdered, or so Woody and Diane Keaton think, by Mr. House, played by Jerry Adler. From there Lynn Cohen’s career takes off like a rocket. She has more than 20 acting credits listed just in the last two years on the imdb.

On TV she became famous for playing Miranda’s– Cynthia Nixon’s– nanny on “Sex and the City.” On the imdb it says she was in 13 episodes– it seems like more. She was also featured in both of the movies. She also appeared in 12 episodes of “Law and Order,” and was Philip Seymour Hoffman’s mother in “Synedoche,  New York.” She had memorable movie roles also in Steven Spielberg’s “Munich” and in “The Hunger Games: Catching Fire.”

Before and during her run in films and TV, Lynn also had a long theater career. She made her Broadway debut in 1990’s “Orpheus Descending,” and returned as part of the cast of “Ivanov” in 1998. Her long list of stage credits also includes off-Broadway and regional theater appearances in shows such as “The Traveling Lady” at Cherry Lane Theatre.

She was lovely, and will be sorely missed. Condolences to her husband, Ronald Cohen.