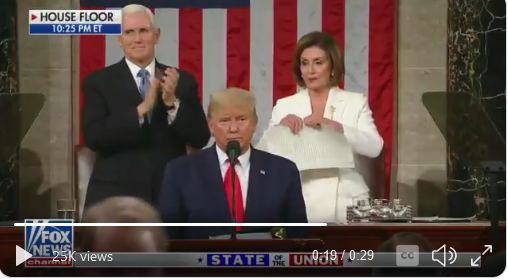 Before tonight’s State of the Union address, Speaker of the House Nancy Pelosi extended her hand to Donald Trump in line with civil behavior.

Trump, impeached by the House, on trial in the Senate, snubbed her and turned away. He’s a boor, with no decency, a man who only respects dictators and goons. Didn’t he think there would be consequences?

Sure enough, Pelosi got him back in the most stunning statement of the night. When Trump was finished, and taking kudos from his illiterate, self serving all white followers, Pelosi slam dunked him. She stood and ripped up her copy of his speech. Trump, with his back to her, had no idea what was going on. Then Pelosi shook hands with Vice President Pence. who accepted her gesture.

Nancy Pelosi after Trump concludes the State of the Union pic.twitter.com/BO1EAq24tI