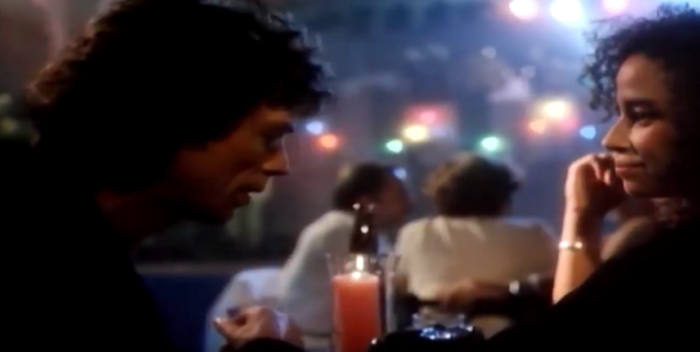 Today’s Daily Mail is blaring a headline they obviously paid for: “Rae Dawn Chong says she slept with Mick Jagger when she was 15!”

But is it true? Because in 1985, she told People Magazine: “Sex is the nature of both Mick’s and my personalities,” says Chong, “but we were never romantically or sexually involved.”

So who is Rae Dawn Chong? She’s the daughter of Cheech and Chong’s Tommy Chong and  a great beauty named Maxine Sneed. In the Daily Mail article, however, the writers her mother was someone named Abigail with whom Tommy had a one night stand. What? Chong and Sneed were married from 1960 to 1970. Rae Dawn is Sneed’s spitting image.

The reason for the Daily Mail article is that Rae Dawn, a minor actress in the 1980s but a major beauty, “blurted out” during a Hollywood Reporter podcast that she’d slept with Jagger when she was a minor– and loved it. Jagger was 33, the year was 1977, and he was ending his marriage to wife Bianca Jagger. The Mail makes it seem like Jagger was cheating, although by 1977 Bianca was done after seven years of sex, drugs, and rock and roll.

How fast did she call the Daily Mail after “accidentally blurting out” this information to the Hollywood Reporter? Ten seconds? Thirty?

Now Rae Dawn is 58, and a grandmother, she says. From her photo in the Daily Mail she looks ten years older. In the Daily Mail article, she also implies some kind of relationships from 1977 with comedian Steve Martin (then 32) and Ryan O’Neal (also mid 30s). She says she didn’t tell Jagger how old she was, and he didn’t ask.

She says she woke up with Jagger only to find Keith Richards staring down at them. (We can deduce that this was in New York during the making of “Some Girls” at Electric Lady Studios.) But Richards never mentions her in his very detailed happily salacious memoir, “Life.” This episode wasn’t important enough for him to report, apparently.

Rae Dawn’s big movie career lasted a very short time. She starred with Arnold Schwarzenegger in 1985’s “Commando.”The next year she and C. Thomas Howell appeared in an egregious, stupid movie called “Soul Man” in which he played a college kid who pretended to be black to get into Harvard. She was his girlfriend. By 1990, Rae Dawn had drifted into D movies and TV shows no one remembers. Her last of those series was in 2003. In 1985 she’d been married once and had a child. She told People she’d never marry again. But in 1989 she married Howell for a year. She had one more husband, Nathan Ulrich, whom she divorced after three years in 2014.

So it’s time to cash in. No doubt a book deal is coming following this episode. But really, let’s take it all with a shaker of salt.