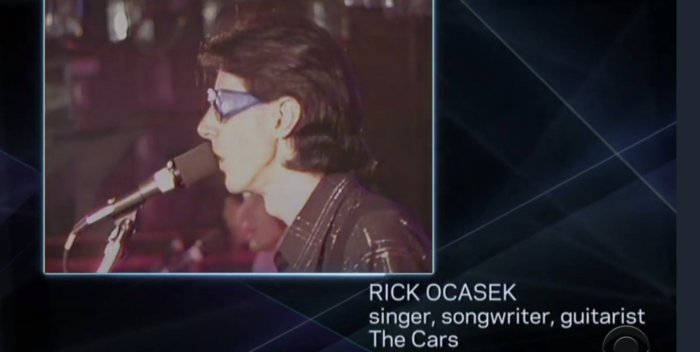 There are already plenty of articles about how the Grammys spelled Ric Ocasek’s name wrong during the In Memoriam segment, and omitted a number of important musicians who died this past year including Robert Hunter of the Grateful Dead and Mark Hollis of Talk Talk. (Also no introduction to the segment, which was really awful.) For some reason, no awards show can figure out how to do In Memoriam without forgetting someone important.

But it’s what the Grammys do to living people that’s worse. Every year the Grammys announce Lifetime Achievement Awards. They call them Special Merit Awards. For years, there was a ceremony that took place on Saturday night around 5pm, the night before the show. The Special Merit winners were highlighted. The ceremony overlapped with Clive Davis’s pre-Grammy dinner, but at least it took place.

Then three or four years ago, it was decided to scrap that event and have a special TV show at which the Merit winners would be honored. The show airs on PBS. But by doing this, there was almost no mention of the Merit Winner on the Grammy telecast. (And the PBS show gets zero promotion anywhere. It’s a sop.)

On Sunday night’s show, the Merit winners were announced in a pre-recorded video. They were not shown live. John Prine was highlighted by a short performance of his song, “Angel of Montgomery,” by Bonnie Raitt. But the others were ignored. Roberta Flack, who is using a wheelchair, came from New York. She cut her time short at Clive Davis’s dinner so she could go home and rest for the Grammys. Alas, the audience had no idea she was there at the Staples Center. Iggy Pop was present, and also not shown. I don’t think anyone came from Chicago. Philip Glass didn’t come. And you didn’t see Chuck D of Public Enemy. (He’s been rightly critical of the show.)

Last year, and I’m sure it was true this year, too, the Grammys made no effort to bring the Special Merit winners to the show. Anyone who came had to pay their own way, and were basically ignored. Because of this, Julio Iglesias and Ozzy Osbourne each skipped the TV taping in May in Los Angeles. This was the same TV taping that newly signed Grammy CEO Deborah Dugan didn’t think was important enough to attend.

The exiting Grammy producer, Ken Erhlich, saluted himself at the end of Sunday’s show with an all-star musical number worthy of Busby Berkeley. Nipsey Hustle, a dead rapper, got a salute. Prince was also saluted, even though he’s had tributes in the past. The show could have made a big deal of Roberta, whose work has influenced so many stars including Alicia Keys and HER. They could have done a segment on Public Enemy, a musical and political force. And Iggy Pop, who invented punk rock. Why even bother coming?

And Philip Glass? Don’t get me started. One of the world’s most important composers, and he was basically ignored.

If there are changes coming with the new production team including Ben Winston, this continuing oversight may be a place to begin.