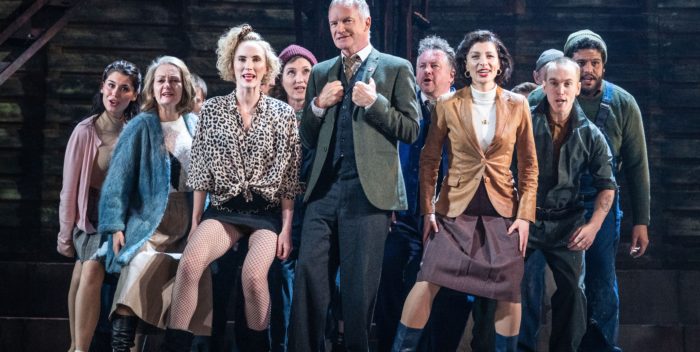 There was always a problem with Sting’s Broadway musical, “The Last Ship.” Even though the music was par excellence, the songs beyond deliciously hummable, the story was always muddled. I’m thrilled to report that has changed, very much for the better. “The Last Ship” has been rebuilt and is eminently seaworthy. Last night’s premiere in Los Angeles at the Ahmanson Theater was a triumph on so many levels but the biggest was that we finally feel like the people of Wallsend, Newcastle, UK who build ships are getting their due.

(Two unexpected guests who I was happy to see: Sting’s former Police mate Stewart Copeland and his lovely wife, Fiona. He loved the show. And told me he’s got three operas in the works. Stewart, like Sting, doesn’t seem to age!)

There were also Sting’s fans, fans who know the music from two albums’ worth of recordings, and those who saw “The Last Ship” on Broadway two years ago. Even the latter were surprised how much the show has changed and grown. It reminded me of what happened to “The Color Purple,” which was not a hit its first time around but returned to Broadway reimagined and disarmed everyone with its charms. This could happen to “The Last Ship,” which just feels so new now and very exciting.

What’s changed? Some cast, although that was never a problem. The music is the same, if not better than ever. The title song is still magnificent and moving. A great number from the middle of the show, “Show Some Respect,” now comes toward the end and has taken on new meaning. But I love the ballads and the mid tempo numbers written by Sting in a manner Richard Rodgers would appreciate, of lush melodies and clever lyrics. The  standouts are “When the Pugilist Learned How to Dance” and “Dead Man’s Boots,” each of which is now staged and delivered to maximum effect. I’m also still enamored of a wonderfully catchy “What  Say You Meg?” sung by our hero Gideon to his former flame when he realizes– and we do, too– that he actually loves and wants to be with her.

Sting, of course, grew up in Newcastle under the shadow of the ships being built. He saw the decline of the industry, and how the people depended on it as it faded. The story he created was about a young sailor with wanderlust (Gideon) who unwittingly leaves a pregnant girlfriend to find himself. He returns 17 years later to find the shipyard being sold off, the business crumbling, that he has a teenage daughter. There’s also the parallel story of the foreman who’s held up the values and kept the business going now facing his own immortality.

Sting himself plays Jackie White now, whose character has been fleshed out. It’s funny to think of the former cheeky, sexy leader of the Police, now 68 years old, as the stalwart of a shipyard but there we are. Sting’s Jackie centers the story, gives it gravitas and history. It doesn’t hurt that he’s a magnetic force on stage, and his voice has only aged with richness and texture.

Jackie Morrison, a Scottish singer, is now playing Peggy White, Jackie’s wife, and she’s a perfect counterpart to Sting. Her voice isn’t really heard until the second act, and it’s a thrill when we meet her. The main characters, our disjointed lovers, Gideon and Meg, are the very sure and sexy Oliver Savile and Frances McNamee. The two actors always had potential for chemistry but never seemed in sync. Now, thanks to the terrific work of co-author Lorne Campbell, we get it, they get it. The central romantic story is adult and meaningful. As their punk daughter (played with Irish spunk by Sophie Reid) says, “Aren’t we beautiful?”