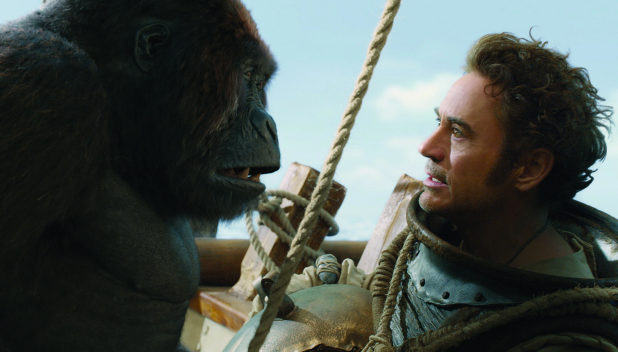 THURSDAY MORNING: “Dolittle” now has a 13 on Rotten Tomatoes. Compare that to a 20 for “Cats.” Yikes!

WEDNESDAY Someone call a vet! Universal Pictures and animals simply don’t mix. The studio that just gave us the much derided bomb, “Cats,” is about to die another day with “Dolittle.” The movie cost $175 million and may not make $20 million this weekend!

The remake of “Dr. Dolittle” stars Robert Downey, Jr in one of his rare non-“Avengers” movie in a decade. The former Oscar nominee for “Chaplin” should be making great serious films now, not this fluff. (He’s capable of winning an Oscar with the right material.)

A load of celebrities including his “Spider Man” protege Tom Holland voice various animals in the new movie. But it doesn’t help. Every review is a pan, or worse. So far the movie has a 17 on Rotten Tomatoes, and it’s sinking.

One problem is that Downey for some reason speaks in a Welsh accent, something approaching it. Reviews note that the film had to be re-recorded to fix his accent, and that the result is a mouth moving out of sync.

“Superficial charm can’t save a film with poor characterization as well as a bizarre and ultimately disappointing lead performance,” reads one blog called Culture Vulture.
Slant: “#Dolittle‘s inability to completely develop any of its characters reduces the film to all pomp and no circumstance.”
Another blogger: “Just when I thought Dolittle couldn’t get any less funny or idiotic, Robert Downey Jr. sticks his arms up a dragon’s a—–e. And I do mean that literally.”
Universal can still hold its head high. Sam Mendes’ “1917” may win the Oscar for Best Picture. You have good days and bad.