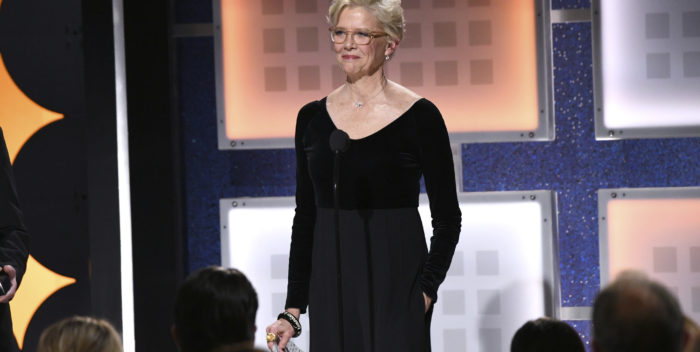 UPDATED Tony Danza emceed the annual AARP Movies for Grown Ups dinner last night at the Beverly Wilshire Hotel with aplomb and genuine excitement. He announced from the stage: “I’m the anti- Ricky Gervais!” And indeed he was, thank goodness. The night — which will air on PBS January 19th — was so authentically pleasant even Hollywood superstar Warren Beatty remarked to me, “I really enjoyed this!”

And so he should have as his wife, Annette Bening, stunning with platinum blonde hair, was honored for Lifetime Achievement by her “20th Century Women” co-star Billy Crudup. She gave a moving, and funny speech, thanked everyone she knew, but at the last minute — during her presentation — she cut the part about Beatty other than to say “I love you.” She did say, “He’s a great filmmaker…” but then choked up and decided to keep the rest to herself.

Among the other honorees was Linda Ronstadt, who came down to Los Angeles from her home in San Francisco. Fighting Parkinson’s Disease, Linda used a wheelchair to get around but stood when her old friend singer Maria Muldaur presented her with her award. Linda told me: “This may be my last trip down here. It’s too hard for me. It’s very painful.” She was surrounded by friends including her bff and career adviser John Boylan. Among those who were lined up to say hello: the great songwriter Diane Warren.

Another hero dealing with Parkinson’s is Alan Alda, who was seated early with wife Arlene. They’ve been married over 60 years, a record for show business couples. Alda presented an award to his “Marriage Story” director Noah Baumbach, who was pretty hilarious in his description of turning 50. (PS Tony Danza is turning 70 this spring and looks younger than most of these people!)

I asked Alda how he wrote the screenplay for his now classic movie “The Seduction of Joe Tynan” on coast to coast flights back in the 70s. I can barely get any work done on a plane.

The Aldas and the Beattys stayed to the very end, with Annette declaring, “Why are we always the last to leave?” She’s right, they are a very sociable couple, and love to hang out no matter the event. Warren was particularly happy to see three time Oscar nominee Diane Ladd, who presented Best Supporting Actress to daughter Laura Dern with a swell reminisce of raising a precocious kid in Hollywood. When Beatty saw Ladd, he told me: “We’ve known each other since we’re 19!”

Juliette Lewis gave the Best Director award to Martin Scorsese and said, “Marty gave me my creative wings when I was 18 in Cape Fear.”

Adam Sandler who received the Best Actor award noted, “I’m a comedian who can act, and that’s good.”

Alan Alda giving to the award to Noah Baumbach for his best screenwriter  quipped, “I’ve been married to the same person for 62 years.  Since I just played a divorce lawyer in “Marriage Story,” people have been  asking me if I ever considered divorce?  I answer no, but my wife has considered murder.”

Noah then replied, “You were that rare person I’d hope you’d be. “

Diane Ladd, who previously won the for Best Supporting Actress award for her work in “Joy,” which was presented to her by her daughter Laura Dern now had the honors and presented Laura Dern with hers for “Marriage Story.”  Laura then loving described her mother as “my muse.”

Don Johnson noted that when he first got the infamous birthday card from AARP, “I was pissed.  Then I went on to have 3 more kids,  I was never really good at math.”