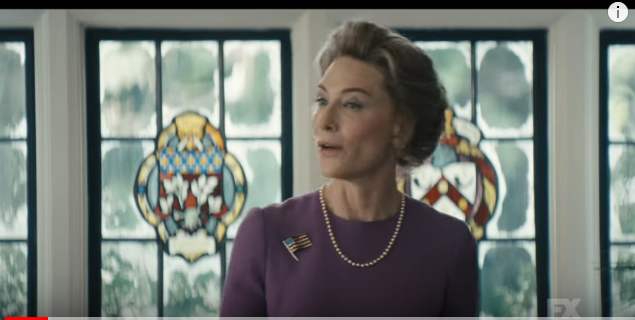 Anti-women’s libber Phyllis Schlafly may be dead but she’s back in the news. Thanks to a new mini series coming in April starring two time Oscar winner Cate Blanchett, we’re about to get a big dose of Schlafly’s take on women’s rights.

“Mrs. America” will play on Hulu or FX, I’m not sure which. Or both. I don’t know. Anyway, it has a great cast including Rose Byrne, Margo Martindale, and John Slattery.

Schlafly has already been in a series this year. She’s featured in “The Marvelous Mrs. Maisel” as a villain circa 1960 when Midge is asked to read her propaganda on a radio show. Schlafly is labelled an anti-Semite as well, which enraged her followers. (I can’t believe she still has followers. She’s right up there with Lyndon Larouche in the nut category.)

Blanchett will get an Emmy award, etc from what it looks like in the clip. But why can’t these shows be on the actual TV and said of having to deal with streaming. I just don’t get it. I hope years from now when I’m in a nursing home they’ll have an easier way to access this stuff!