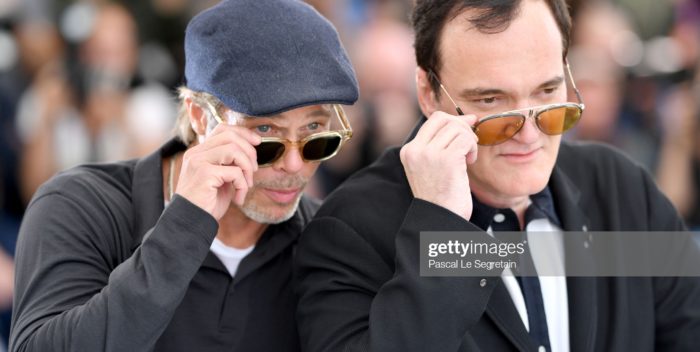 If there were any red eyes visible Jan. 7 at Tao Downtown, it wasn’t from tears shed over losing or winning prizes. It was from the red-eye flights that shuttled a whole mother-lode of glittering A-listers and award-contenders from one coast to the other—from Sunday night’s Golden Globe gala in Hollywood to Tuesday night’s New York Film Critics Circle Awards ceremony. These nominees give and give, you know.

There was precious little overlap in the chosen ones, too—only three, in fact: The Best Supporting Actress of 2019 was, once more, Laura Dern for “Marriage Story,” playing a stiletto-heeled field-marshal of a divorce lawyer, and Quentin Tarantino repeated his Best Screenplay win for his revisionist view of the Sharon Tate murders, “Once Upon a Time . . . in Hollywood.” Then, there was that pesky, persistent “Parasite,” again slam-dunking the Best Foreign Language Film category.

You can expect to find all three to be represented among the nominees, which the Academy of Motion Picture Arts and Sciences will post on Monday. And don’t be surprised if “Parasite”—South Korea’s aggressively outrageous dark comedy—spreads beyond a single-Oscar category to Best Picture, Best Director, Best Screenplay and other key categories, as Alfonso Cuaron’s “Roma” did last year.

“The best film of the year in any language” is how Ben Stiller, an admitted “Parasite” partisan, characterized the movie to the Manhattan crowd. Its writer-director, Bong Joon-ho, stepped up to accept his award and signed in with some of his signature outrageousness. Instead of his expected Korean, he threw some explicit English at a table where the director and title player of “The Irishman,” Martin Scorsese and Robert De Niro, sat—an old line from their “Raging Bull”: “Did you fuck my wife?”

Brad Pitt, a winner in L.A. (for “Once Upon a Time . . . in Hollywood”) and a loser (to Joe Pesci in “The Irishman”) in NYC, made the trek to pass out the Best Screenplay award, describing Tarantino’s prized-winning script as “iambic Quent-ameter” and claiming that he’s “the only guy I know who needs cocaine to stop talking.”

Tarantino did a deep bow to his favorite critics, Andrew Sarris and Pauline Kael (neither of whom really got along, ironically). Sarris’ review of Tarantino’s “Kill Bill” still has a place of prominence on his refrigerator, and Kael remains “the woman who articulated my cinematic aesthetic in a way that nobody ever had before.”

Peter Rainer of the Christian Science Monitor was less loved: “You have never given me a positive review in 30 years,” Tarantino said, seeming a little injured by that.

Scorsese gave some heartfelt thanks to Netflix for coming up with the cash that helped him finish the film. “No one else would touch this film for 10 years,” he said.

When time came for Pesci to accept his award, he brought Scorsese and De Niro to the stage with him, for support. “I asked Martin and Bob to come up with me because I’m really terrible at this stuff,” he confessed shyly. “I don’t do it properly. Anyone who works on these films knows you can’t do it alone. You want to talk about real support? I had Bob. I had a beautiful script and cast, and, to top it all off, I had Marty telling me everything to do.” His tongue tangled then, and he fumbled, so De Niro intervened and provided the translation: “What he means is, ‘Thank you.’”

Although he directed the Best Picture of the year, Scorsese was not necessarily—in the view of the New York Film Critics—the Best Director. That distinction was shared by two brothers, Josh and Benny Safdie. It took both of them to get a harrowing, hard-driving, turbulent performance out of Adam Sandler in “Uncut Gems,” playing a buck-chasing jeweler on the brink steeped in chaotic chicanery.

Sandler, who is not famous for such displays and is not exactly a darling of the critics in the room, gamely showed up and kidded them about the brickbats they’ve thrown. “All you critics, I know what you have said about me over the years,” he told them. “It’s fine. I have two words to say to you: You’re mean! But this is about the boys. The Safie Brothers.” He relayed the surefire way to tell the brothers apart. “Well, Josh looks like a crazed yeshiva student who could possibly shoot you, and Benny looks like a friendly dentist who could also possibly shoot you.”

Like “The Irishman” (but on an infinitely smaller scale), “Uncut Gems” was also a film that took a decade to get to the screen. Sandler was always their first choice for the role, and he hoped that they would go down as one of the great brother acts in history “like the Wright brothers—and the Menendez brothers.”

Well, it all wasn’t about The Brothers Safie. Sandler is staying over a night—his night to howl: he’s the National Broad of Review’s choice for Best Actor of the year.

Valentino-clad in luscious green, Lupita Nyong’o looked very much the opposite of the spooky presence she projects in “Us,” her Best Actress performance. Antonio Banderas’ Best Actor portrayal was a quasi-facsimile of his mentor and discoverer, Spanish filmmaker Pedro Almodovar, in “Pain and Glory.” He left with the dawn for Spain where he’s appearing in “A Chorus Line.” The Oscar campaigning he’ll leave to Adam Driver and Joaquin Phoenix. “I’m not a politician,” he said. “I’m an actor.”

Others favored by the New York Film Critics Circle this year included “I Lost My Body” for Best Animated Film; Mati Diop’s “Atlantics” for Best First Film; Tamara Kotevska and Ljubomir Stevanov’s “Honeyland” for Best Nonfiction Film and “Portrait of a Lady on Fire” (by Caire Mathon) for Best Cinematography.

Spike Lee, who just picked up his first Oscar last spring (for co-adapting the script of “BlacKkKlansman”) and is being honored this spring (April 27) with the 2020 Chaplin Award from Film at Lincoln Center, led the celebs like Reese Witherspoon, Robert Klein, Alec Baldwin, Steve Buscemi, Ethan Hawke and Samantha Bee.