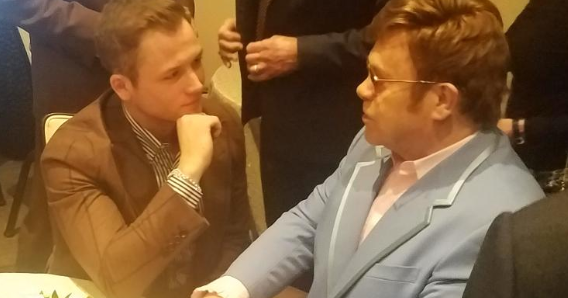 For three hours yesterday afternoon no one could move in any direction in the main ballroom at the Four Seasons Hotel in West Hollywood. The stars packed the room as if they were the most well dressed sardines for the annual “tea” for BAFTA, the British equivalent of the Academy Awards.

Such as it was for Leonardo DiCaprio, who emerged from nowhere it seemed, followed by Adam Driver. This created an instant logjam of paparazzi who came flying from all corners of the room to get a picture of the “older” star (Leo) and the newer one (Driver). The two men were eventually persuaded to shake hands and even hug, which threw the throng into a frenzy.

Watching all of this from a few feet away I stood with the even newer, younger star, Taron Egerton, who plays Elton John in “Rocketman” and has a Golden Globe nomination to show for it. He chatted with fans and friends and looked on as Di Caprio and Driver

But Di Caprio and Driver had to move it, so to speak, because bigger things were afoot: Elton John was coming. Yes, the Elton John, Sir Elton and his posse which included husband David Furnish and the great lyricist Bernie Taupin, came pouring through the side door as Leo and Adam were whisked away so the Rock Star of Rock Stars could hold court. Among his audience were songwriter Diane Warren and “Pose” star Billy Porter, as well as a series of journalists (including myself) who beamed as they were granted sit downs. You’ve never seen so many smiles cross the faces of cynical weary scribes. 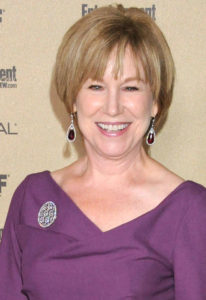 But back to BAFTA, where mixed in among the cucumber sandwiches and scones with clotted cream I ran into the great Mary Kay Place, who’d just received a text that she’d won Best Actress from the National Society of Film Critics for a very small, wonderful film called “Diane.” She was, to say the least, in shock. She’s also won Best Actress from the LA Film Critics, was nominated for a Gotham Award, and is nominated for a Spirit Award. “I can’t believe how people have embraced that movie,” she said. “It literally cost 47 cents to make.” Mary Kay became famous 45 years ago on TV in “Mary Hartman, Mary Hartman” and she has never stopped delivering beautiful performances both comedic and dramatic. Her hard work has paid off! 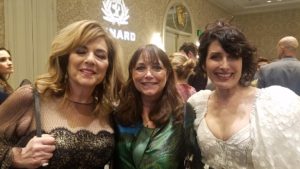 As the news spread through the room she was joined by two long time pals who came to celebrate: Karen Allen of “Indiana Jones” fame (among other great films), Caroline Aaron of “Mrs. Maisel,” and Lisa Edelstein (“House,” etc.) I took their picture. Caroline exclaimed: “You don’t know how long we’ve all been friends!” Well, I do now!

And around the ballroom: Jared Harris introduced me to Tobias Menzies, the new Prince Philip of “The Crown,” Florence Pugh– the sensation of “Little Women” took a spin and was absolutely lovely. Laura Dern, the Michelle Obama of this Oscar campaign, pressed the flesh, and then there was also Robert De Niro, Cynthia Erivo, Greta Gerwig, Sacha Baron Cohen and Isla Fisher, Alfre Woodard, Antonio Banderas and Pedro Almodovar, Beanie Feldstein, George MacKay from “1917,” and even Zhao Shuzhen, the great Chinese actress from “The Farewell.”

Antonio Banderas has also been given a slew of Best Actor awards from critics groups across the country for his sublime performance in Pedro Almodovar’s “Pain and Glory” told me that “this is the first film that I’ve been getting such reaction from in my long career.  People are telling me it’s truly affecting their lives, the way they think about the lives they’ve lived and will live.”