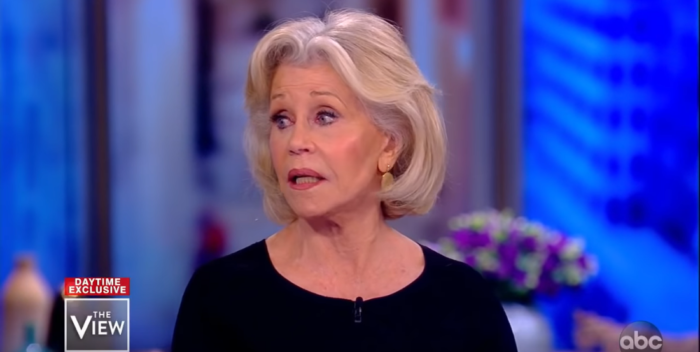 Jane Fonda’s Fire Drill Fridays may have set a record today: not only have they made a huge impact for climate control. But this may be the only TV show cast that has almost all been in handcuffs for one reason. Fonda has gotten Sam Waterston, Tomlin, June Diane Raphael, Brooklyn Decker to stand with her. The only cast member who hasn’t made the trip to Washington is Martin Sheen. But he’s been arrested many times as a social activist. I’ve no doubt his sympathies are with Fire Drill Fridays.

Fonda has done something no one else has done or does: she’s stood up for a cause, and stuck with it. It’s been a remarkable run. You don’t see commitment like this. “Already we’ve taken $11 trillion out of banks that are underwriting fossil fuel expansion,” she told her audience this morning. Bravo!

None of this was done for publicity. But I should note that “Grace and Frankie” returns to Netflix on January 15th for its sixth — but not final– season. The show has been Netflix’s biggest hit series, even including bail money!

Divestment works! $11 trillion has already be taken out of banks invested in fossil fuel expansion. Thank you, @Janefonda! #FireDrillFriday pic.twitter.com/5WMaIgp5hp