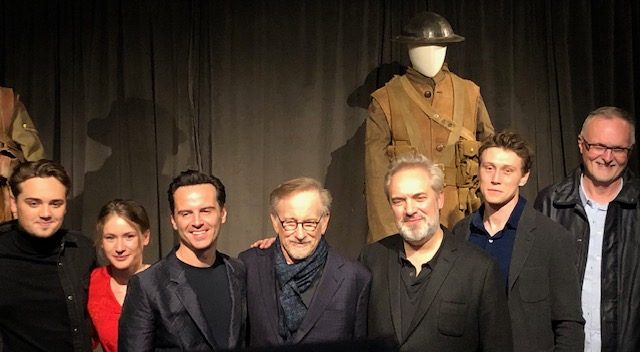 From the looks of it, Sam Mendes “1917” might knock off “The Irishman” and “Once Upon A Time In Hollywood” as the best pic frontrunner. Last night was the premiere at the IMAX in Hollywood, which capped weeks of press and industry screenings that have garnered raves across the board. Steven Spielberg’s Amblin was one of the producers along with Universal.

Spielberg hosted a reception the previous night at the Landmark in Culver City. He promised the crowd before the screening that they were “about to have an experience that is quite extraordinary.” He went on to say that, “This is such a revolutionary and groundbreaking film. In 1997 I was making a film in London [Saving Private Ryan] and I saw an amazing musical that Sam directed called “Oliver.” A couple of years later I got this script called “American Beauty” and sent it to Sam. Sam made it as his first film, and won his first Oscar as Best Director and Best film for Dreamworks.”

“There are scripts I read, and then there are scripts that I get lost in, the experience of when I get so deeply in it. That’s how I felt reading Sam and Krysty Wilson-Cairns script. The screenplay put me right back into a period that I’m very personally interested in WW1. It’s a moral story, it’s a human story, it’s a story about survival and it’s a story about brotherhood and a story with many qualities to aspire too. This is a movie where the images and the words are together, they are interchangeable with each other. “

Spielberg praised the two young actors, George MacKay and Dean-Charles Chapman, who were in attendance. Also there were cinematographer Roger Deakins. and actor Andrew Scott, who plays the hot priest on “Fleabag” but has a more somber role here.

The eminent director noted that, “Sam told me he was going to shoot the entire picture in one shot. I said, ‘Sam this is not ‘Birdman,’ this is outside. This covers miles, acres and is under a sky and is day and its night. Sam explained to me the concept of the one shot is not to show off or be inventive or him showing off as the cineaste he is, but that it’s literally to make all of you that third character in trying to get to A to Z on this amazing survival trip. It makes you feel you’re watching it in real time. It’s a way to deeply involve you and press all your empathy buttons. This is one of the most revolutionary pictures I’ve ever seen and one of the greatest examples of filmmaking I’ve ever experienced.”

Spielberg introduced Mendes, then Sam did the honors with some of the crew and cast. Mendes observed “one of the greatest privileges of this is that Steven Spielberg treats me like an equal. But the truth is, he treated me as an equal the first day he met me. One of his great gifts is that he makes any filmmaker feel a million dollars the second he walks in the room. He looks you in the eye and he says, ‘come along, I can make a movie, you can too.’ So, it felt like the most natural thing in the world to bring this project back to my friend.”