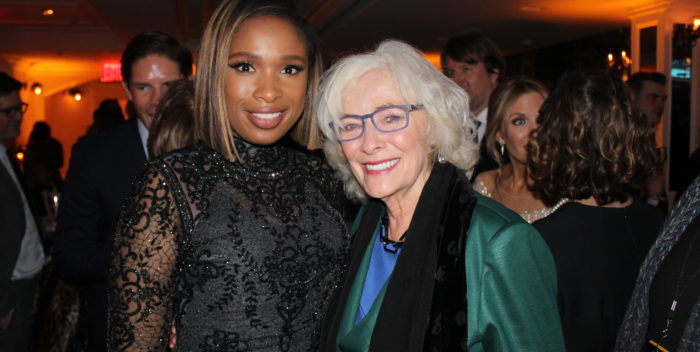 There’s a chance, if critics keep their claws retracted this Friday, that Jennifer Hudson could land an Oscar nomination for “Cats.”

At last night’s star studded premiere at Lincoln Center’s Alice Tully Hall, the audience cheered her twice during the movie as she performed the signature song, “Memory.”

And who approved of Jennifer’s performance? Why, Betty Buckley, who won the Tony Award in 1983 for singing the same song in the Broadway stage version. No one’s opinion of the movie or the song mattered more to me last night. At Tavern on the Green, Betty– who just finished a national tour in “Hello, Dolly!” — told me: “I loved it. I thought she was terrific.”

Hudson, who is only a third of the way through shooting the Aretha Franklin biopic “Respect,” was the one star who mixed and mingled at Tavern on the Green, accepting enthusiastic kudos from everyone including “Hamilton” creator Lin Manuel Miranda and country singer Jennifer Nettles. At Alice Tully Hall, no less than superstar Chic band leader Nile Rodgers roared with approval over Hudson’s stellar performance. The marvelous Beanie Feldstein couldn’t stop beaming with delight.

The fact is that Hudson does more with the character of Grizabella than anyone could have imagined. Her rendering of “Memory” and the character is akin to what she did with her Oscar win for “Dreamgirls” and “And I’m Telling You I’m Not Going.” It’s a glorious moment in a crazy quilt of a movie that actually works. If you loved “Cats” on the stage you’ll love it here. The fur, as they say, flies!

And Jennifer really did get two massive ovations in the middle of the movie. She delivers a sublime “Memory” that builds and builds. Listen below.

“Cats” opens Friday, with a slew of great performances and the Andrew Lloyd Webber score that stands up so well– not just “Memory” but “Mr. Mephistopheles” and the rest of the songs pull the otherwise very thin storyline along. (I still don’t know what jellicle is. It doesn’t matter.) This “Cats” is a love letter to Dame Judi Dench, who proves to be the most compelling cat of all.

PS One or way another, the Academy should definitely have JHud sing “Memory” on the Oscars. It’s a no-brainer!

Photo of JHud and BBuckley courtesy of Wilson Morales, all rights reserved