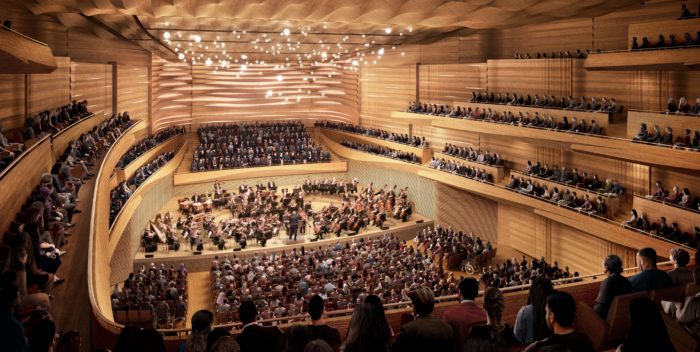 Regardless of the hyperbole, Geffen Hall will be smaller, losing 500 seats so that there will be a more intimate feeling. The new design looks good and sounds good, and more importantly the renovations will not require a long shut down. Once they’re done with this, I suggest coming over to the Walter Reade Theater, now long in the tooth. Then Alice Tully Hall.

Here are some of the highlights of the plan:

THE NEW CONCERT HALL: A new hall configuration•Moving the stage forward by 25 feet, with all seats closer to the stage, providing acoustical and visual intimacy (this concept was pioneered by Pierre Boulez in the 1970s New York Philharmonic Rug Concerts, and was reintroduced by the Mostly Mozart Festival)•Wrap-around seating surrounding the orchestra •Improving sight lines by restoring the original 1962 steeper seating rake (incline)on the orchestra level (the original rake was altered in 1976

Improved acoustics•A new seating capacity, reducing from 2,738 to 2,200 • Reconstructing side tiers and resurfacing of walls to improve reverberation, bass and sound differentiation • The stage ceiling will be elevated, and replaced by an adjustable canopy over the musicians to allow for fine tuning of the Hall’s sound.

PROJECT TIMELINE• The new David Geffen Hall will open in March of 2024 and will requir etwo short closings for constructionto limit time the Philharmonic spends out of the Hall.• Early work will begin offsite, during a prefabrication period that will allow the construction schedule onsite to be briefer.• The first closure, May 2022–October 2022, will result in the initial framework of the new concert hall configuration. •The Hall will re-open and introduce a “surge season,” from November 2022–April 2023. The new configuration — with the stage now moved forward — will allow tuning for orchestra and audiences to enjoy many benefits of the new hall prior to final completion.• During the second closure period, May 2023–February 2024, the New York Philharmonic will perform in other venues in New York City, including Carnegie Hall and New York City Center. •Lincoln Center’s Mostly Mozart Festival will be out of the Hall for the summers of 2022 and 2023and will present their full summer season throughout the Lincoln Center campu