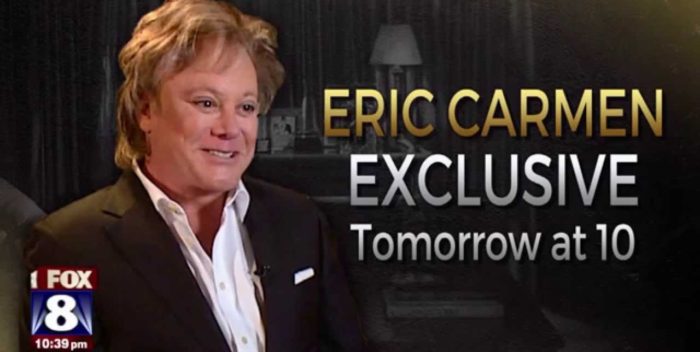 Buried deep in Ohio, Donald Trump has a former rock star as a major supporter.

Eric Carmen, lead singer of the Raspberries in the 1970s, has outed himself as a Trump backer. He loves his president. Carmen is most famous for songs like “Go All the Way” and “Let’s Pretend” in the early 70s. Then, when the band broke up, Carmen was fished out of obscurity by Clive Davis. He had two big solo hits on Arista Records with “All By Myself” and “Never Gonna Fall in Love Again.” Each of them were fashioned from classic music pieces by Rachmaninoff.

A decade later, Carmen scored one more hit with “Hungry Eyes” from the “Dirty Dancing” soundtrack. Since then, he’s lived with cult status outside of his native Cleveland.

More recently, Carmen has been on Twitter where he picked up more contemporary rock star fans from the E Street Band family like Steve and Maureen van Zandt and Nils and Amy Lofgren. An avowed Raspberries fan, I also followed him on Twitter.

So imagine everyone’s surprise when Carmen declared his fealty to Trump in the last week or so. He’s a hard line conservative, decrying socialism a la Trump and retweeting people like Fox News’s Jesse Watters, Seb Gorka and Charlie Kirk. He tweeted: “If you want to hate me, just know this. I love the USA, I support our brave military men and women, I support the police and firefighters, I support our President and the First Lady, I believe in civility, and I do not want to live in a Socialist country. That is what I believe.”

Since then, Carmen has been in a Twitter firefight, not just with former fans who can’t believe all this, but also with the Lofgrens. And he really loves those Trumps. Another Tweet in a response to criticism of them: “There is no excuse for that kind of sick, disrespect. The First Lady was speaking about the opioid problem while The President donated his salary to the fight against opioid addiction.”

Carmen is also against the impending impeachment and supports the Republicans who are on the House committee: “Nobody has any proof that Jim Jordan did anything wrong. All I know is what I saw during the impeachment nonsense. Jordan was a voice of sanity, along with Devin Nunes.”

He’s also traded contentious Tweets with rocker Peter Frampton: “I love your music, Pete, but I would never presume to tell you, or anyone else, what network they should watch. I respect your right to disagree with me, and you should respect my right to disagree with you. That used to be the way things worked here in the USA. Carry on.”

Carmen also raised everyone’s ire when he used a statement from Hitler’s chief propagandist Joseph Goebbels to make a point in a re-tweet:

Carmen lives near the Rock and Roll Hall of Fame in Cleveland. But if he goes to next spring’s induction ceremony, he may actually be singing “All By Myself.”

Still, now Trump has a rock star he can call for his rallies. In fact, I’m sure once his staff reads this they’ll be using “Go All the Way” as a campaign song.