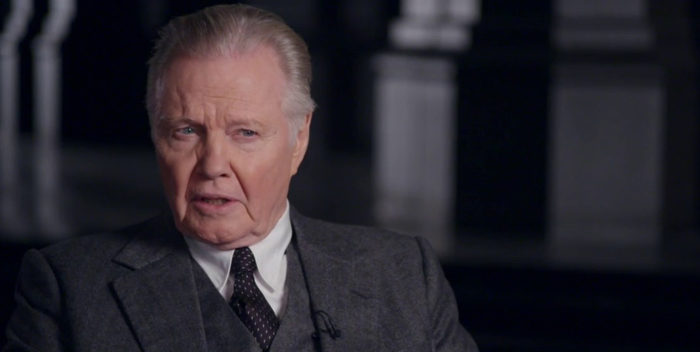 CORRECTED: Donald Trump will further degrade awards giving when he gives the National Medal of Arts to an all white group of people this Thursday, most of whom are his ardent supporters.

The big name is actor Jon Voight, who loves Trump and is as right wing as you can get. Even though he won an Oscar for “Coming Home” in 1977, Voight is outspoken for Trump. He also filmed a role in an anti-abortion movie that’s been long in the making. I doubt his daughter, Angelina Jolie, will come to the White House ceremony.

Others include bluegrass singer Alison Krauss, and WETA president Sharon Percy Rockefeller. She’s the wife of former West Virginia Democratic senator and governor Jay Rockefeller. Trump loves West Virginia because he can do big rallies there and the people think he’s helping them. Sharon also ran WETA, a PBS station. (Ironically Trump has tried to eliminate funding for PBS). Also receiving the Medal of Arts are all the military marching bands. There might be some non-white people in there.

The group is rounded out by the Claremont Institute, philanthropist Teresa Lozano Long, chef Patrick J. O’Connell and author James Patterson. The former is a prominent conservative think tank. Long and her husband, who are at least 90, are Republican philanthropists from Austin, Texas. Patterson– I’m not surprised he’s with Trump, are you? He went from the ad biz to creating a bestseller factory of junk thrillers. Why is O’Connell getting the award? I’m sure there’s some nefarious reason.

According to the Atlantic Monthly, a committee made recommendations to Trump, but they were ignored.