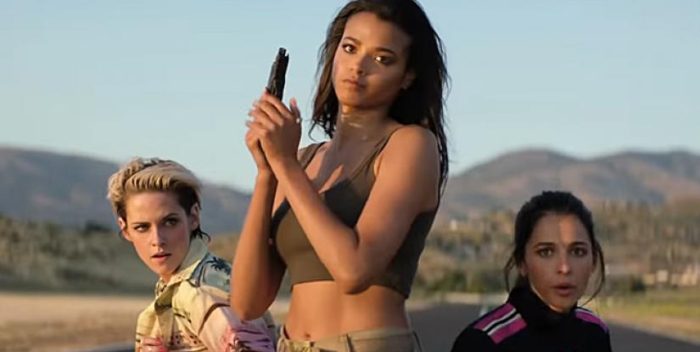 Call them Angels of the Mourning.

The new “Charlie’s Angels.” written and directed by Elizabeth Banks– one of our favorite people– is headed for a big flop this weekend.

Last night in previews, the new Angels made just $900,000. Predictions are for a $12 million weekend, if lucky. That’s pushing it.

The new “Charlie’s Angels” stars Kristen Stewart and two actresses no one’s ever heard of. It also a convoluted plot, with three Bosleys and who knows who is voicing Charlie. (It should have been Robert Wagner, who took over from the beloved John Forsythe.)

Stewart plays an androgynous Angel named Sabina, not Sabrina. I’m sorry, but that doesn’t fly. None of it does. The audience doesn’t want Angels who aren’t smart, sexy, women. This was never a PC organization. We want Jaclyn Smith, Kate Jackson, and Farrah Fawcett. And Cheryl Ladd. All the fun is gone.

On Rotten Tomatoes, these Angels have scored a lowly 58%. There is no enthusiasm for it. But you could tell when what seems like years ago, Miley Cyrus, Lana del Rey, and Ariana Grande released the title track called “Don’t Call Me Angel.” It was met with yawns. Three superstars, no one cared. And “Don’t call me angel” is the chorus from another classic hit, “Angel of the Morning.” That should have been the song they covered.

Sony needn’t worry. They’ve had a great year with “Once Upon a Time in Hollywood,” the latest Spider Man movie, “Far from Home,” and coming soon is Tom Hanks in the wonderful “Beautiful Day in the Neighborhood.” “Zombieland” has also done very well, and “Little Women” should be a banger, with loads of Oscar nominations.