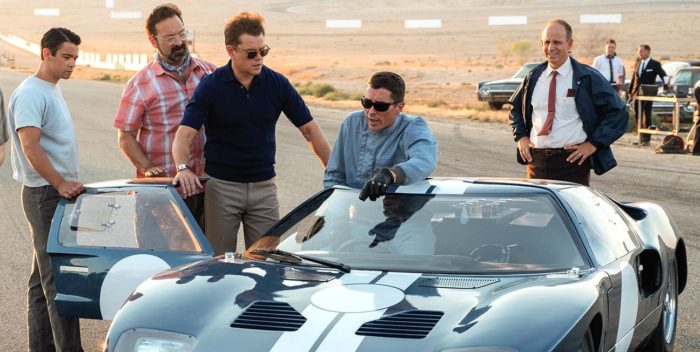 “Ford v Ferrari,” much buzzed for Oscar nominations, is coming this Friday. Among racing movies, it’s a winner, with a compelling central story about Henry Ford’s team vs. Ferrari, very American. But it’s really about Ford’s famous Carroll Shelby (you know his name from the Mustang) played with stolid charisma by Matt Damon vs. his own driver, eccentric and endearing Ken Miles (Christian Bale).
At a screening this week, director James Mangold had a lot to say about his central characters of Shelby and Miles. “It was these unique characters and also a way that a lot of us in filmmaking relate to the struggle of these characters and that we, too. like Carroll Shelby and Ken Miles are trying to convince large corporations to do something they haven’t done before that costs a great deal of money, but the whole thing works.”
Also on hand were actors from the movie Josh Lucas and Jon Bernthal. The big stars, Damon and Bale, are tied up making movies.
“Unlike the drivers,” said Mangold, “We don’t die, but if our gambles don’t pay off, we do magically disappear. And so, that is kind of the struggle that also fascinates me and it was kind of analogous in all our worlds, I’m sure many of your worlds, whether they’re filming or otherwise.”
Added Mangold, “It made me think about making movies because of the unique friendships I’ve made making films, and they’re the kind of friendships that I felt like I could represent on screen with these characters, which are friendships made of doing something, not hanging, not drinking, not watching, not talking, but that you actually get together and make something happen together.”
Directed at audience members who are not, like me, into racing movies, Mangold said, “The last thing I wanted to say about racing, for those of you who are nervous or just bragging here going, ‘I don’t like that shit.’The thing is that what I didn’t discover, so that I can share this with you, is that it is a really interesting world with its own language, with a beauty, with a kind of logic that transcends just cars. And what we did, and what we tried to do, you can be the judge is do something they ever can do when they’re at the races or on TV, which is get inside these characters heads, get inside the cars, understand why they’re slowing down, why they’re pulling over, why they’re getting ahead… You never know that when you’re watching red and yellow whips on some screen with a bunch of jackasses talking about it, but you do know in this movie hopefully.”
“Ford v. Ferrari” sounds like a lawsuit. In other countries, the movie is called “Le Mans 66.” Either way, it’s a pulse-raiser.   Shelby (Damon) and the British driver Ken Miles (Bale) battle corporate interference and the laws of physics to create a revolutionary car for Ford Motor Company that will take down the dominating race cars of Enzo Ferrari at the Le Mans race in France, which lasts a startling 24 hours. It’s as much a buddy movie as a racing film. Set in 1966, the movie is very much a period piece and a throw back to the wonderful, solid films of that era. (Also sure to nab an Academy-Award supporting actor not is Tracy Letts, who is terrific as Henry Ford II, continually living in the shadow of his legendary father.)
Bale has the flashier role of Shelby, a nonconformist with an out-of-control temper who didn’t like playing by corporate rules or any rules at all for that matter. Bale has transformed himself again, from the roly-poly Dick Cheney he played in his last role he’s now all wiry and sinewy as the tightly-wound Shelby. “Ford vs. Ferrari” is a terrific ride for 2 1/2 hours that seems to fly by. The final hour is the Le Mans race and Mangold has welded the CGI seamlessly into the exciting race sequences that will have you literally glued to your seat, whether you’re a racing enthusiast or not.