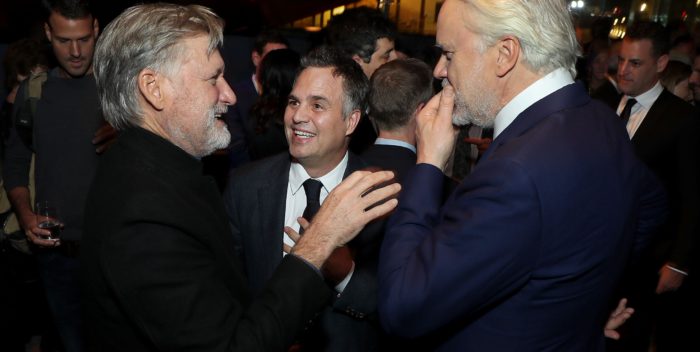 Dupont will no longer be a Teflon corporation after audiences see  Todd Haynes’s memorable scary “Dark Waters,” opening November 22nd. Mark Ruffalo stars as the corporate lawyer from Cincinnati who took down the company and won a $670 million settlement for rural West Virginians who were poisoned by the company when they put something called C-8 in Teflon.

Yeah, the Teflon in our pans. It turns out everyone in the world is infected in some way now, it’s far worse than just the local farmer. Now they’ve removed C8 from Teflon, but the damage has been done.

Feeling nervous? “Dark Waters” is a call to arms directed by Todd Haynes, who usually deals with more intimate films. But activist Ruffalo discovered the story of how Rob Billot working for Cincinnati law firm Taft– who usually worked for the bad guys– saw what was happening and decided to do something about it. He learned how babies were being born deformed, people worked with Teflon were dying of cancer, farm animals were losing their minds and expiring at alarming rates.

Everyone showed up except for Hathaway (on bed rest waiting for baby number 2). More on her in a minute. It was Ruffalo, an environmental activist, who pulled this project together. Remember Haynes is better known for his character pieces. But he also made a movie years ago with Julianne Moore called “Safe,” in which no one was safe from chemicals. In a way, he’s return to an old interest and done a smashing job. This might be his most commercial movie.

Ruffalo plays  lawyer Billot, who’d just made partner at a white shoe law firm Taft when his Parkersburg, West Virginia grandmother sends two local farmers to him. All their cows are dead or going mad, everyone is sick. A massive amount of data has already been compiled and hidden by Dupont, which knows what’s happening and won’t do anything about it. Selling frying pans is more important.

Out of the frying pan and into the fire went Billot, who had a young family and dwindling financial resources. The case against Dupont went on for years, but luckily Billot had the help of his firm and two older lawyers (Tim Robbins and Bill Pullman, in roles that used to be played by Josef Sommer and Donald Moffat) who support the cause.

“Dark Waters” plays like a procedural in the mode of “Silkwood” or “Erin Brockovich.” Haynes and co. keep it simple and honest, with tremendously subtle work from a supporting cast that includes Bill Camp and Mare Winningham. Oscar winner Anne Hathaway starts slow as Mrs. Billot but comes through with (as usual) with stark authenticity.

In a season of gangsters, Hollywood cowboys, papal friendship, and alienated villains, we need “Dark Waters,” a David vs. Goliath tale that affects all of us in real life and once again exposes corporate greed. Billot deserves a medal for what he’s done. Haynes, Ruffalo et al should get their recognition for bringing the story to the screen.