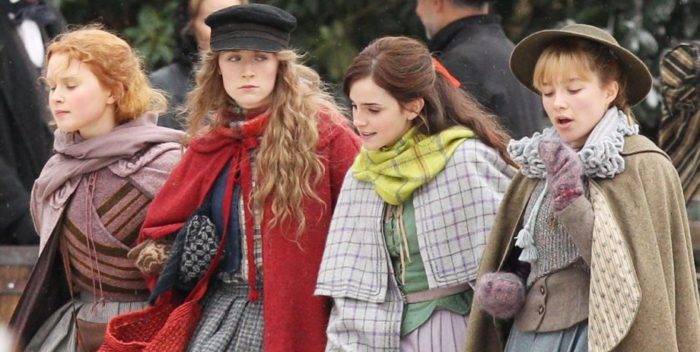 This year’s Oscars? So far it’s been high testosterone. There’s Tarantino, Di Caprio, and Pitt from “Once Upon a Time in Hollywood.” Then you’ve got “The Irishman,” with Scorsese, De Niro, Pacino, Pesci, and pretty much no women. Ditto “Two Popes,” “Dolemite,” “Ford v. Ferrari,” and so on.

Where are all the girls? The glaring lack of women in film this year may be why so many arm chair pundits have tried to float a balloon for Jennifer Lopez in “Hustlers.” This is not an Oscar performance, but for a minute there, JLo had the stage to herself.

But now we’re warming up. Two really great movies with ridiculous review embargoes star and feature lots of terrific ladies who will soon fill up slots in lead and supporting categories.

“Little Women,” directed by Greta Gerwig, is girls girls girls. Saoirse Ronan leads a phenomenal cast including Laura Dern, Florence Pugh, Emma Watson and even Meryl Streep. Ronan is lead, Pugh is in supporting, Gerwig could be a Best Director nominee. The whole gang will be Best Ensemble at SAG. The cast should play “The Irishman” on Family Feud.

“Bombshell” is Jay Roach’s terrific film about the Roger Ailes-Gretchen Carlson scandal at Fox News. Charlize Theron is lead as Megyn Freakin Kelly, Nicole Kidman is supporting as Carlson, and Margot Robbie nearly steals the show as a composite female victim of Ailes’s lechery. This group also works as an exceptional ensemble. And I’d rather see “Hustlers” in ensemble rather than single out one performer.

So the women are here, we just had to wait for them. And let’s not forget Renee Zellweger as “Judy,” Cynthia Erivo leading “Harriet,” and Alfre Woodard searing in “Clemency.”