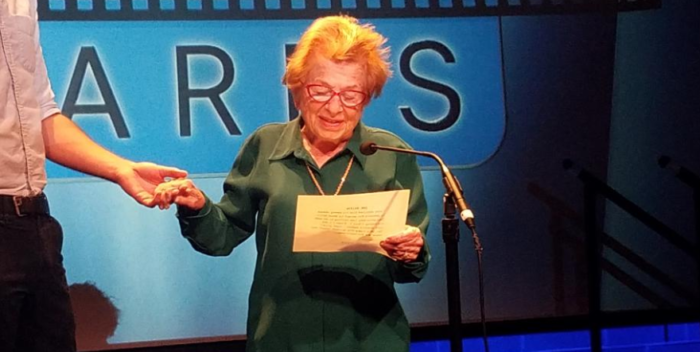 “Apollo 11” snatched 5 wins at the Critics Choice Awards in Brooklyn Sunday night. Frederick Wiseman was presented the first ever DA Pennebaker Lifetime Achievement Award, and Michael Apted was saluted for a lifetime of filmmaking including his extraordinary series of films culminating in the new “63 Up.” The former award was presented by filmmaker Chris Hegedus in memory of her late husband. Michael Moore presented to Apted.

Dr. Ruth received a nice standing ovation when she presented the Documentary Short Subject award. “I am short,” she said, “and I will make this short.” She’s 91 years young.

Apollo 11 took home the evening’s most prestigious award for Best Documentary Feature as well as Best Editing for Todd Douglas Miller, Best Score for Matt Morton, Best Archival Documentary, and Best Science/Nature Documentary. This could mean it’s set up nicely for the Oscars. But let’s not forget that last year’s winning doc, the popular “Will You Be My Neighbor?” by Morgan Neville, failed to score an Oscar nomination. It was bewildering. I do think “Apollo 11” will make it, however.

“Once again, we are thrilled to celebrate and support the vibrant and groundbreaking work of these talented documentarians. We are proud that our yearly gala event has become an informed and valuable way for people to find the best films out there and for the work of these filmmakers to find their audiences,” said CCA CEO Joey Berlin. “It was a great night of lauding the greats in the documentary field as well as some outstanding newcomers.”

The award for Best Cinematography went to John Chester for The Biggest Little Farm.

The award for Best Biographical Documentary went to Toni Morrison: The Pieces I Am.

The Best Music Documentary award went to Linda Ronstadt: The Sound of My Voice.

The Best Short Documentary Award was given to Period. End of Sentence.